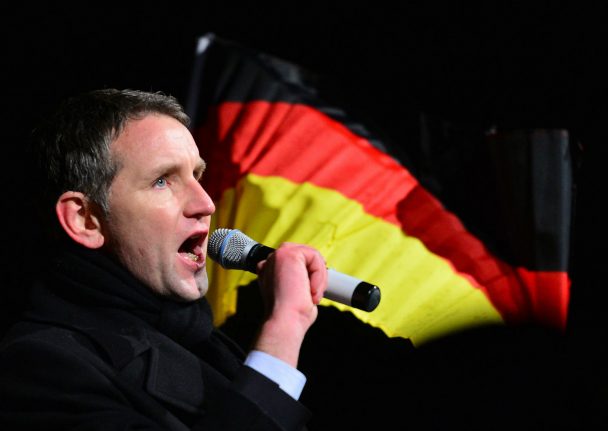 The AfD chairman of Thuringia state also urged a “180-degree shift in the politics of remembrance”, arguing that Germany was too hung up by its guilt over the war and Holocaust.

AfD co-chief Frauke Petry declared that “for the executive committee, the Dresden speech of January 17th overstepped the limit of what is democratically tolerable within a popular-liberal party”.

She expressed confidence that the majority of the party would back the decision – but powerful members swiftly voiced their dissent.

He argued Höcke “did not at any point breach party rules,” speaking to regional broadcaster Mitteldeutscher Rundfunk.

Höcke himself also insisted that he had “neither violated the statutes nor the principles of the party”.

The leadership of Höcke's Thuringia faction published a statement in support of the former history teacher, calling the expulsion proceedings “politically motivated”.

“The aim is apparently to greatly limit the diversity of opinion, which differentiates the AfD from other parties, and to use these means to remove troublesome people from the party,” it said.

The episode is reminiscent of a feud that erupted last year over another regional AfD lawmaker's anti-Semitic comments.

But Petry did not condemn Gedeon's comments and only held an emergency meeting with him after which the lawmaker offered his resignation from the AfD state assembly group.

Meuthen was then enraged over Petry's meddling.

Crucially, in the latest row, around Höcke, he has taken the side of the Thuringia politician.

“I don't think that this proceeding is right, even though the speech was really off the mark,” he told national news agency DPA.

The AfD's popularity took a knock after Höcke's comments, with polls now showing support at around 10 percent, down from last year's average of around 13-15 percent.

The party, which was founded in 2013 on an anti-euro platform, changed tack to rail against immigrants after 2015's mass refugee influx.

It is setting its sights on winning its first seats in national parliament in general elections on September 24th.