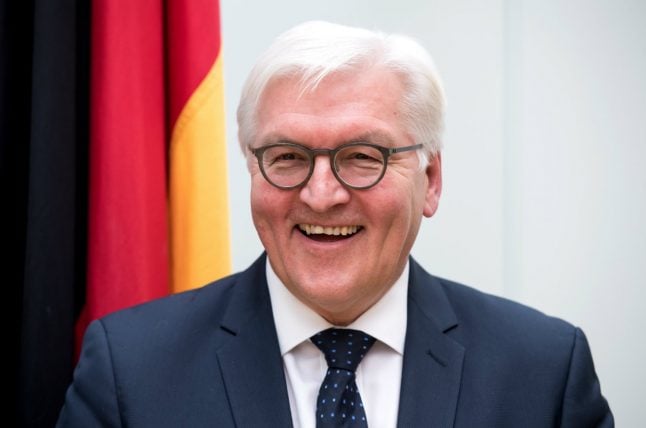 Frank-Walter Steinmeier. Photo: DPA
The 61-year-old, who regularly polls as Germany's most popular politician, will represent the EU's top economy abroad and act as a kind of moral arbiter for the nation.
For the Social Democrats (SPD), his appointment raises the party's profile just as its candidate Martin Schulz, the former European parliament president, readies to challenge Chancellor Angela Merkel in September elections.
Steinmeier is expected to receive a large majority of votes after Merkel's conservatives, lacking a strong candidate of their own, agreed to back him to replace incumbent Joachim Gauck, 77, a former pastor from ex-communist East Germany.
The vote was held in Berlin's glass-domed Reichstag building by a 1,260-strong special Federal Assembly, made up of national lawmakers and deputies sent from the country's 16 states.
'Antidote to populists'
With his snow white hair, round glasses and dimpled smile, Steinmeier is one of Germany's best known politicians, having twice served as top diplomat under Merkel for a total of seven years.
Though the trained lawyer is usually measured in his speech, in the thick of last year's US election campaign Steinmeier labelled Donald Trump a “hate preacher”.
After the billionaire won the White House, Steinmeier predicted relations would get “more difficult” and said his staff were struggling to detect any “clear and coherent” foreign policy positions from Trump.
As Steinmeier has prepared for the new post, which he assumes on March 19th, he has vowed to “be something of a counterweight to the trend of boundless simplification”, calling this approach “the best antidote to the populists”.
The Berliner Morgenpost daily judged that Steinmeier looks set to be “the anti-Trump president”.
Steinmeier is only known to have lost his cool once, in 2014, when he yelled at Berlin protesters who had accused him of being a “war monger” over his Ukraine policy. The outburst was so unusual it became a minor YouTube hit.
A policy wonk by nature, Steinmeier served as advisor and then chief of staff to Merkel's predecessor, the SPD's Gerhard Schroeder, coordinating the security services and helping shape biting labour and welfare reforms.
In 2009, Steinmeier ran against Merkel and lost badly, only to return years later to serve in her cabinet.
Political scientist Michael Bröning of the SPD's think-tank the Friedrich Ebert Foundation said that “as foreign minister, Steinmeier often acted as a voice of reason, bridging gaps and bringing people together”.
“It is hardly surprising that Steinmeier has branded himself as the essential anti-Trump.”
Steinmeier is well known in the world's capitals, but his appointment worries some in eastern Europe, who see him as too soft on Russian President Vladimir Putin.
He raised eyebrows with NATO partners last year when he criticised a military exercise in Poland as “sabre rattling”.
While his SPD praised him for sticking to the party's tradition of “Ostpolitik” and maintaining dialogue with the Kremlin, critics accused him of being a Russia apologist.
Having Steinmeier move into the presidential Bellevue Castle in Berlin has further emboldened the SPD, which has felt euphoric since Schulz's candidacy dramatically improved its poll ratings.
After years in the shadow of Merkel, the Social Democrats are smelling blood as the chancellor faces deep divisions within her own conservative camp, and the rise of a hard-right populist party after opening German borders to a million asylum-seekers since 2015.
Since Schulz took over the party and candidacy for the chancellorship in late January, the SPD has gained about 10 points and edged dangerously close to Merkel's bloc, even narrowly beating it in one survey.
The election may still be more than seven months away, but the SPD finally hopes to have a realistic shot of toppling Merkel.
“For Germany's Social Democrats, Steinmeier's election is a prelude to something bigger to come: a victory in September's elections against Merkel,” said Bröning.
“While this seemed impossible only a few days ago, the recent rise in polls has changed the equation.”