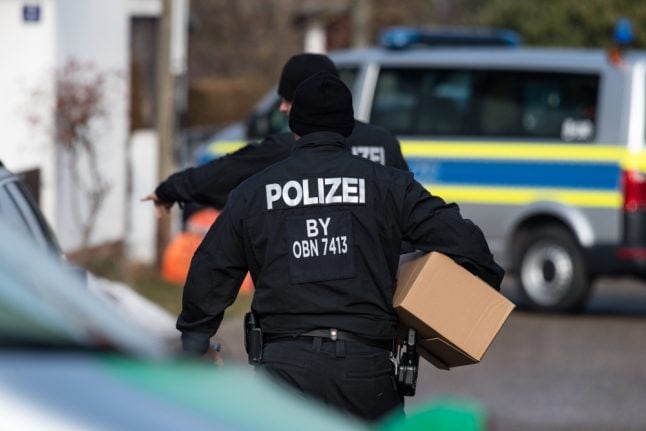 Police carrying boxes out of a home in Pliening, Bavaria, where the 'Reichsbürger' group was based. Photo: DPA

Around 250 police on Tuesday raided 15 apartments and offices across Bavaria, Baden-Württemberg and Rhineland-Palatinate, linked to 16 suspects under investigation for falsifying documents.

The men and two women being investigated are so-called “Reichsbürger” (citizens of the Reich) and range in age from 40 to 62. They are suspected of committing commercial and gang-related fraud – in particular falsifying documents – as well as the unauthorized assumption of authority.

Seven of the suspects were part of a self-proclaimed “Federal Nation of Bavaria”, according to police. The “country” is based east of Munich in the community of Pliening. The others being investigated are said to be sympathizers of the group and some received fake documents from them.
The raids were carried out to collect more evidence against the suspects.

The suspects had bombarded government agencies with objections to official notifications for things like paying fines, and wrote letters in which they “declared their crude, right-wing views and made their own charges against the agencies”, police wrote in a report.

Investigators believe the content of the letters could be enough to constitute attempted extortion, attempted coercion and the unauthorized assumption of authority. There are also indicators that the group developed a financial authority and a trade office. “Identification cards” and “drivers’ licenses” were also issued by the group for a fee.

The raids on Tuesday follow a police operation at the end of last month in six different states against a suspected terrorist group led by a Reichsbürger, believed to be plotting attacks against Jews, police and asylum seekers. Two men including the suspected leader were arrested.

People who are part of the Reichsbürger scene assert that the German Reich, or even Prussia, still exists, with some groups establishing their own “government”, or stockpiling weapons.

The movement attracted more attention in October after a self-declared Reichsbürger shot and killed an officer during a police raid on his home.

Germany’s domestic security agency, BfV, has estimated that about 10,000 Reichsbürger live in Germany, and between 500 to 600 of them are believed to be right-wing extremists.