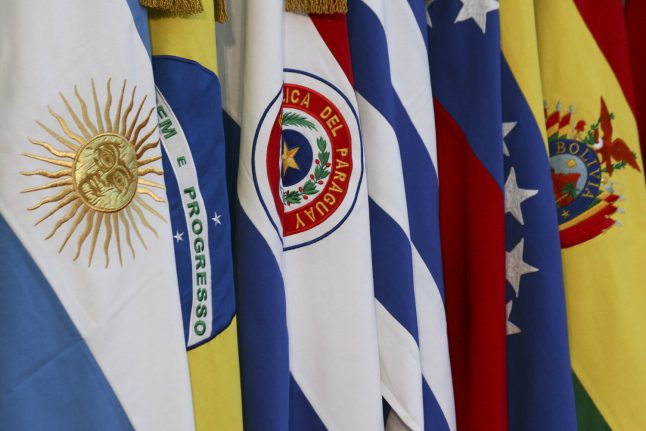 File photo: DPA
Her comments, posted in her weekly video message, came ahead of a visit by Uruguay's President Tabare Vazquez to Berlin on Wednesday.
“We are fundamentally in favour of international trade agreements, which is why we are very happy with the effort in the Mercosur countries” to reach a deal with the European Union, Merkel said.
“It's a matter of reaching a fair deal, where Europe's interests are taken into account just as are those of Latin America.”
But she acknowledged that discussions over EU access for Mercosur's agricultural products would be “a difficult subject”, given the large EU subsidies for its farmers.
Mercosur regroups Argentina, Brazil, Paraguay, Uruguay and Venezuela – although Caracas's participation has been suspended for failing to meet democratic and trade standards.
The next round of EU-Mercosur trade talks are set for March.
They will be held against a backdrop of US President Donald Trump's hostility to international trade deals, including his decision to pull out of the Trans-Pacific Partnership.
He is widely expected to drop any attempt to seal a free-trade deal with the EU, and has also lashed out at NAFTA, the accord between Canada, Mexico and the United States, calling it on Thursday a “catastrophe for our county.”