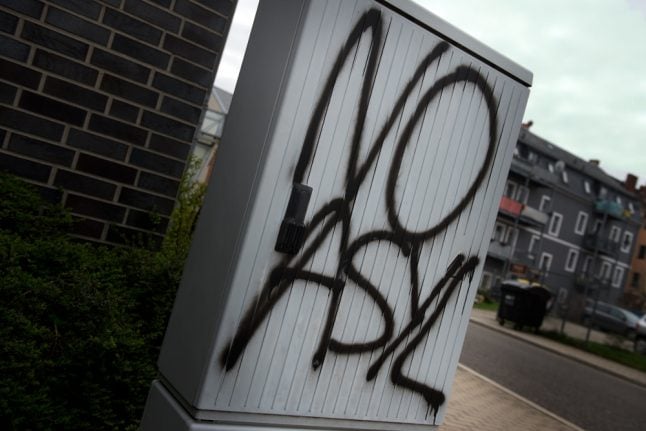 Graffiti reading "no asylum" in Freital, Saxony where a group will soon go on trial for crimes against refugee homes.

A preliminary report by the Federal Criminal Police Office (BKA) shows 970 crimes committed against asylum homes in 2016, according to reports by broadcaster NDR, the Süddeutsche Zeitung and news agency EPD on Thursday.

States reported another 2,396 crimes against refugees outside of homes last year, according to EPD.

The number of crimes against asylum homes was a drop from 2015 at the height of the influx of refugees arriving in the country, when 1,031 such crimes were reported. Both numbers were roughly five times higher than the crimes recorded in 2014 – 199.

But officials had not separately recorded crimes against refugees outside of shelters before, thus there is no available comparison for the figure of close to 2,400 incidents.

While overall crime decreased at refugee centres, the incidents reported seemed to increase in violence. The number of assaults reported rose to 78 last year from 60 in 2015, and the number of cases that involved guns almost doubled, from 31 in 2015 to 57 last year.

Still, the number of arson attacks did drop, though the media reports did not specify online by how much. Outside of refugee homes, there were nearly 400 cases of assault.

Last week German police launched raids across the country in an investigation into a right-wing extremist terror group that was believed to be plotting attacks on asylum seekers, Jews and police. Two men were arrested, one of whom had been identified as part of the so-called Reichsbürger movement – people who do not recognize the legitimacy of the German government.

“Our nation has shown that it can defend itself – and have a sharp eye toward – right-wing extremism, right-wing violence and right-wing hatred,” said Baden-Württemberg interior minister Thomas Strobl at the time.

Meanwhile the trial of eight members of a suspected right-wing terrorist group in Freital is set to begin in March in Dresden. The seven men and one woman are accused of committing at least five xenophobic or politically motivated attacks against refugee homes or political opponents, and face charges of forming a terrorist group, attempted murder, causing explosions and grievous bodily harm.