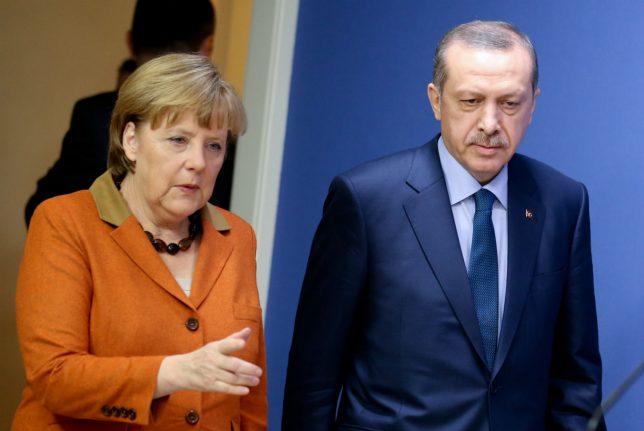 Merkel is expected to meet both President Recep Tayyip Erdogan and Prime Minister Binali Yildirim during the hugely sensitive one-day visit to the capital Ankara.

The relationship between the two NATO allies has been battered in the last months by a series of rows in the wake of the July 15 failed coup aimed at ousting Erdogan.

Berlin has repeatedly expressed unease over the extent of the crackdown that has seen some 43,000 people arrested in the wake of the putsch, under a state of emergency that has now lasted over half a year.

Erdogan, meanwhile, has vented his exasperation that Germany has not responded to requests for the extradition of hundreds of suspects linked to the coup, the Kurdish militant movement and the ultra-left.

Last week it was reported that 40 Turkish soldiers stationed at NATO bases had asked Berlin for asylum, with Turkey pressing for the bids to be rejected.

While Germany has expressed alarm over an alleged deterioration of press freedoms in Turkey, Ankara wants Berlin to hand over the former opposition Cumhuriyet newspaper's editor-in-chief Can Dundar who escaped the country after the coup.

But Dundar has founded a new anti-Erdogan news portal in Germany — Ozguruz (We Are Free) — and been received as an honoured guest by officials including President Joachim Gauck.

The visit is all the more sensitive with Erdogan planning a referendum in April on new powers that critics say will create one-man rule. Merkel meanwhile is also thinking of elections at home in September where Turkey

Germany is home to some three million people of Turkish origin, the legacy of a massive “guest worker” programme in the 1960s and 70s and the biggest population of Turks in the world outside of Turkey.

The controversy over Turkey's post-coup crackdown has dealt a new blow to its long-running EU membership bid, although Berlin has stopped short of backing Austrian calls for the entire process to be halted.

“This trip is taking place because we are convinced it is necessary to stay in continuous contact with Turkey, an important NATO partner, a very important EU neighbour,” said Merkel's spokesman Steffen Seibert.

“These days it is important to talk,” he added.

Merkel will also want to press Turkey to keep implementing a deal that has so far successfully reduced migrant flows to Europe, despite threats by Erdogan to walk away from it due to a failure to fulfill a pledge to grant Turks visa-free travel.

The chancellor's visit will be her first to Turkey since the coup, after German Foreign Minister Frank-Walter Steinmeier held prickly talks in Ankara in November.

With the hugely controversial constitutional referendum looming in April, the visit has not been universally welcomed in Turkey with opposition leader Kemal Kilicdaroglu saying he was disappointed in Merkel.

But Seibert said it was “absurd” to suggest Merkel was positioning herself to back Erdogan ahead of the referendum.