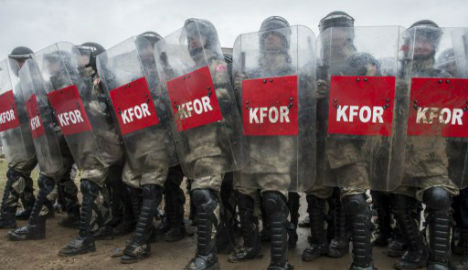 Turkish troops working with Nato in Kosovo. Photo: Armend Nimani/AFP
Around 43,000 people are under arrest in Turkey on charges or links to last year's failed military coup against President Recep Tayyip Erdogan.
“About 40 Turkish troops, mostly of high rank and stationed in NATO bases, applied for asylum in Germany,” Der Spiegel magazine and the ARD television station said in a joint report.
One officer, who insisted he had no connection to the coup attempt or sympathy for those behind it, was quoted as saying: “If I return to Turkey I risk imprisonment, or perhaps torture.”
The report quoted Germany's interior ministry and Office for Migrants and Refugees as saying the soldiers would be treated no differently as other people who apply for asylum.
Turkey has been vital to European Union (EU) plans to stop the mass flow of migrants from the Middle East and Africa into the bloc, especially to Germany.
Relations between Ankara and Berlin deteriorated in the aftermath of the attempt to topple Erdogan but German Chancellor Angela Merkel is planning to visit Turkey on February 2.
The German government has expressed alarm about the crackdown on alleged plotters linked to the coup while Turkey has criticised Berlin for failure to extradite alleged terror suspects.
Turkey blames the coup effort on US based preacher Fethullah Gulen. He denies the charges.
Around three million Turkish people live in Germany.