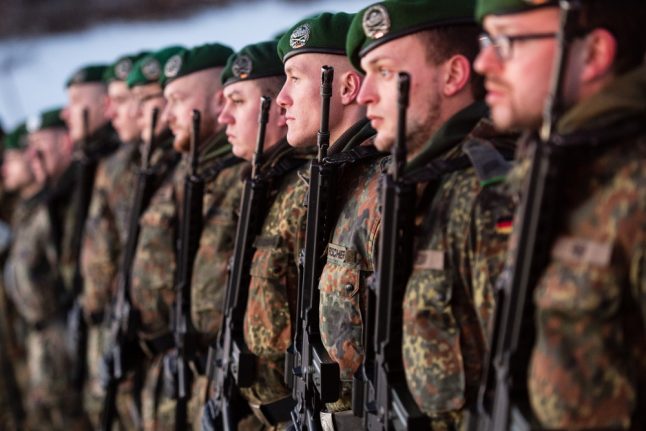 German soldiers in Bavaria before being sent to Lithuania. Photo: DPA.

A group of German officers landed in the Baltic state's capital Vilnius to coordinate the deployment of a 1,200-strong battalion that will include forces from several NATO members.

Last summer, NATO ordered continuous troop rotations on its eastern flank as a tripwire against Russian adventurism in states formerly under Moscow's control.

Apart from the German-led battalion in Lithuania, Canada will lead a multi-national battalion in Latvia, Britain in Estonia and the US in Poland.

Vilnius University analyst Deividas Slekys said the deployments would force Russia to think twice about any provocations in the region.

“The deployment of a well-armed battalion makes a snap intervention scenario less likely. Russia will need to calculate how Washington, London or Berlin would react,” he told AFP.

The historic burden of Nazism has made EU heavyweight Germany a reluctant military leader.

Lithuania's President Dalia Grybauskaite has called Berlin's decision to lead the NATO battalion a “breakthrough” toward it playing a greater role in European defence.

The deployment began days after the inauguration of maverick US President Donald Trump who has suggested he may seek to improve ties with Moscow.

The NATO operation has sparked anger in the Kremlin, which insists that the US-led alliance is trying to encircle Russia.