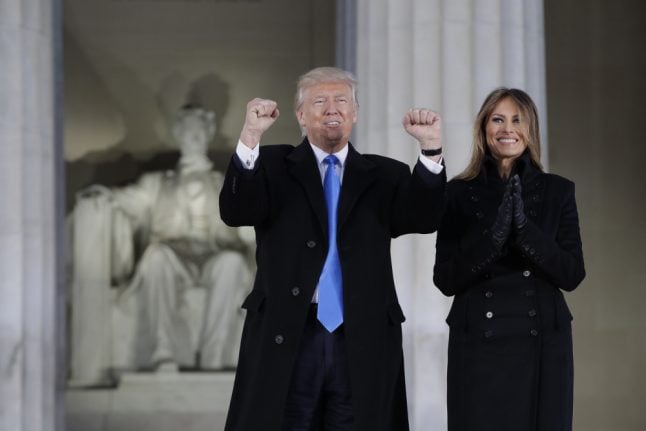 Donald and Melania Trump at the Lincoln Memorial. Photo: AP/dpa.

German politicians on the right and left were still issuing warnings about Trump on the day of his inauguration.

“That is the last thing we need from the leader of such a powerful country,” Barley told the Neue Osnabrücker Zeitung.

She added that if he didn’t change his provocative demeanour, conflicts would likely ensue.

Barley also pointed out how Trump reacted in such an openly offended and disdainful way when actress Meryl Streep criticized him at the Golden Globes.

“That is not the standard of the US President,” Barley said.

“One must think before tweeting. It doesn’t seem as though Trump always does this.”

“We Europeans will take on the challenge of doing more for security and defence,” McAllister said to the Berliner Zeitung.

Horst Seehofer, the leader of the CDU’s sister party, the CSU, has spoken more optimistically about Trump. He says the real estate mogul is always welcome to his state of Bavaria, and praised Trump’s style of “speaking directly to people” to the Passauer Neue Presse in November.

At the time, Seehofer warned of condemning Trump too soon before he took office, and argued that he should be given a chance.

This week, after Trump yet again criticized Nato, Seehofer once again defended the Republican and suggested that by calling the alliance “obsolete”, he perhaps did not mean it was “superfluous”.

“We must handle terms very carefully. There is a considerable difference between when something is outdated – which I am – and when it is superfluous – which I am not,” Seehofer said.

“Minister-President Seehofer considers it important to stay in touch with leaders of other countries, even when all positions may not be in agreement,” a spokesperson from Seehofer’s office told The Local on Friday.

“Solutions for problems can only be found when speaking with one another. Minister-President Seehofer does not find the prevailing stance in German politics to be effective: that of expressing criticism from a distance, or criticizing other countries for the outcome of a democratic process.”

On the more far-right of the political spectrum, the Alternative for Germany (AfD) party has been welcoming of Trump’s leadership since the election, with some members greeting his critique of Nato as a “chance for reform”.

Those who oppose Trump have also rallied a worldwide women’s march for Saturday, including in various cities across Germany.

“These marches, in accordance with the Women’s March in Washington D.C., will be held to affirm the values and uphold the rights women have fought so hard to gain over the last century,” the group Democrats Abroad wrote in a statement. “These ideals were set forth to protect and acknowledge the most fundamental rights of human beings and to speak up for those who cannot speak for themselves.”

“We, as Americans living abroad, promise to continue the fight for our values, for equality, for justice, for kindness and for decency. And by doing so, we will put the new administration on notice that we will not back down, that they will not be able to carry out their right-wing mandate. We will stay vigilant throughout the next four years,” said Democrats Abroad Germany chair Quaide Williams in a statement.

The group is expecting 800 people in Berlin alone on Saturday, and further marches are planned for Düsseldorf, Frankfurt, Hamburg, Heidelberg, and Munich.

“I'm marching to show solidarity with those who are negatively affected by Trump's presidency, and to reinforce that Munich is not a place for hate or intolerance,” one interested participant in the Bavarian capital told The Local.

On Friday morning the German DAX was 0.4 percent lower. Since the beginning of the year, the DAX has been stuck in a narrow margin of around 11,600 points.

“Having overdosed on the expectations of significant tax cuts and infrastructure investment, the question now moves to whether the new President will be able to deliver on his campaign promises now that the time has come for action to replace all of the words,” Hewson wrote.

Hewson added that for investors and CEOs, Trump’s inauguration speech will be “required listening, given how last week’s press conference shed little detail on what to expect with respect to additional details on policy.”

For the American CEO of the Berlin- and San Francisco-based startup test IO, Trump’s presidency does come with many unanswered questions, but the company still plans to move ahead with a US expansion.

“We still plan to expand vigorously in the United States this year and add jobs, and we just hope President Trump doesn’t take credit for the jobs we were already planning to add,” test IO CEO Philip Soffer, who is currently based in Berlin, told The Local.

Soffer said he and his company will most keenly be looking out for two policy issues in particular: repealing Barack Obama’s health care plan, and net neutrality.

For test IO – which tests software using professionals – Obama’s system allowed their freelancers to get affordable health care coverage. As Trump promises to repeal and replace the healthcare system, Soffer says he doesn’t yet know exactly what that will mean for the company.

“Any move that ties health insurance to an employer is very bad for freelancers,” Soffer said.

“We do crowd-based testing and many of the people we have doing the testing don’t have full-time jobs. Some are people who are cobbling together multiple freelance jobs and they need to be able to buy health insurance at a reasonable rate.”

There is concern that Trump might be against net neutrality – the open-web principle that all of the internet should be treated the same, not discriminating or charging differently to, for example, give big companies a competitive advantage.

“Net neutrality allows smaller companies like test IO to have access to the same speeds as larger companies. It’s much harder to compete against incumbents without net neutrality,” Soffer explained.

“I view that as a fairly dire proposition for startups in the US.”

But one advantage Trump’s presidency could give to Germany is his tough immigration stance. If it becomes harder to get permission to work in tech in the US, some might look to startup hubs like Berlin, Soffer said

“In the long-term, it certainly might limit the number of people we can hire in the US, but right now we have a growing demand in the US to serve. But from a startup standpoint, it’s good for Berlin.”