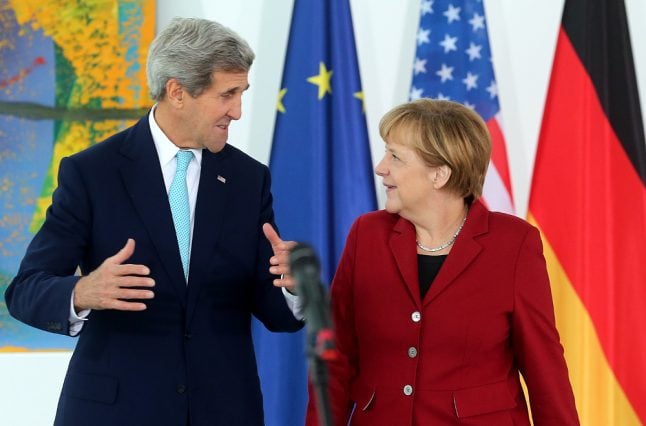 Stopping over in London on the closing stages of his final diplomatic tour just four days before Trump is due to take office, Kerry gave an interview to CNN International.

Asked about the furore surrounding an interview by Trump with Britain's The Times and Germany's Bild, Kerry defended the European Union, Merkel and Germany's refugee policy.

“I thought, frankly, it was inappropriate for a president-elect of the United States to be stepping in to the politics of other countries in a quite direct manner,” Kerry told CNN's Christiane Amanpour.

“He'll have to speak for that,” Kerry warned. “As of Friday he's responsible for that relationship.

“But I think we have to be very careful about suggesting that one of the strongest leaders in Europe – and one of the most important in respect of where we are heading – made one mistake or another.”

Kerry said: “I think she was extremely courageous and I don't think it amounts to that characterization at all.”

Kerry warned that Europe's enemies, including Russia, are trying to divide the West and recalled that President Barack Obama's administration had strongly opposed Brexit.

While in London, Kerry was to have a private farewell dinner with Britain's top diplomat Foreign Secretary Boris Johnson and give farewell interviews to media.

On Tuesday, he is due to fly to the World Economic Forum in Davos for a final set of discussions with members of the global business and political elite.