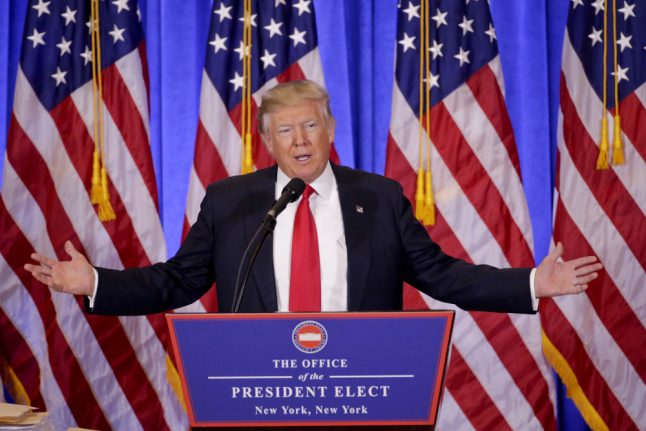 In an interview with Germany’s Bild and the Times of London released on Sunday, Donald Trump criticized Merkel’s open-door refugee policy as a “catastrophic mistake”, called NATO “obsolete” and even took aim at the German car industry,  warning he would impose punitive tariffs on carmakers that produce in Mexico.

Top German officials have since responded.

Trump not only condemned Merkel’s refugee policies, but he also suggested she was to blame for the UK’s vote to leave the EU.

“Other countries will leave” the European Union in future, Trump prophesied, saying this would be largely due to the pressure the bloc was put under following a significant uptick in immigrants and refugees arriving.

“If they hadn't been forced to take in all of the refugees, so many, with all the problems that it… entails, I think that you wouldn't have a Brexit. This was the final straw that broke the camel's back,” he said.

Merkel insisted on Monday that “we Europeans have our fate in our own hands”, in response to Trump's comments.

The Chancellor also told reporters that she will work towards getting the European Union's 27 remaining member states to strengthen their economies and meet future challenges, including the battle against terrorism.

“In addition to this is Islamist terrorism and that concerns all of us, but the civil war as such was in Syria first,” said Merkel, who has also come under fire at home after 890,000 asylum-seekers arrived in 2015 alone.

Merkel shrugged off the latest comments, noting that Trump's position “is known”.

“When he is in office, and at the moment that's not the case, we will work with the new American government and see what kind of agreements we can reach,” she said.

Vice Chancellor Sigmar Gabriel on Monday defended the government's policy towards refugees. He insisted the refugees, branded as “illegals” by Trump, had mostly fled war and turmoil in the Middle East, but Gabriel did agree with the president-elect that the US invasion of Iraq may have been America's worst ever mistake.

“There is a connection between the flawed US interventions, especially in terms of the Iraq war” and the refugee crisis, Gabriel told Bild, adding that the immigrant influx “confronted us in Europe, not the United States”.

“I said a long time ago that NATO had problems,” Trump said.

“Number one, it was obsolete, because it was designed many, many years ago,” he said.

“Number two, the countries aren't paying what they're supposed to pay.”

On the campaign trail, Trump said he would think twice about helping NATO allies if the United States were not “reasonably reimbursed” for the costs of defending them.

Gabriel responded by saying that Europe should face the American leader with “confidence”.

“I don't underestimate what Trump says, especially regarding NATO and the EU, but a little bit of self-confidence would serve us well in such a situation,” added Gabriel.

“Look at China, the place he has attacked the hardest, and how relaxed the Chinese have been in their reaction… Maybe there is something to be learned from that.

“Europe in this current weak phase has to pull itself together, has to act with confidence and in its own interest.”

Germans and Europeans “are not somehow inferior [to the US]; we have something to offer”, he added.

Meanwhile German Foreign Minister Frank-Walter Steinmeier said on Monday that Trump's NATO remarks have caused concern at the US-led military alliance and also appeared at odds with his own officials,

Steinmeier, in Brussels for an EU foreign ministers meeting, said he had met NATO head Jens Stoltenberg earlier on Monday “where the statements of President-elect Trump… were received with concern”.

“This is in contradiction with what the American defence minister said in his hearing in Washington only some days ago and we have to see what will be the consequences for American policy,” added Steinmeier.

Steinmeier added that Trump's comments had caused astonishment and would dominate the foreign ministers' meeting.

“This day will be influenced if not determined by the statements of the American President-elect, which caused here in Brussels astonishment and agitation, and I suppose, although I am sure about that, not only in Brussels!”

Trump singled out Munich-based luxury carmaker BMW in his interview, saying the firm would face the tariffs if it continued construction of a planned factory in Mexico, rather than the US.

But Gabriel warned Trump about implementing such tariffs.

“The American car industry will be worse, weaker and more expensive” if Trump were to levy a 35-percent tax on German cars, Gabriel told Bild. He added it would also hurt US carmakers if components were subject to higher duties.

Trump had also complained that more German cars could be seen on the streets of New York than US cars on German streets.

Gabriel responded that “the US will have to build better cars” if they want to change that.

“It doesn't help to make others weaker, you don't yourself get stronger by doing that,” he added.

A BMW spokesman told AFP on Monday that construction at its factory in San Luis Potosi, Mexico, is “continuing as planned and expected to be finished in 2019”.

Series 3 cars to be built at the plant “are planned to serve the global market”, and not just the US, he said.

“We are a net exporter from the USA,” he went on, pointing to the firm's largest factory worldwide in Spartanburg, South Carolina.

That facility produced more than 400,000 vehicles in 2016 and directly or indirectly supports almost 70,000 jobs, the spokesman added.

Gabriel told Bild that he expected Trump to change after being sworn in as president on Friday, when he will “realise how diverse the economic links” between the US and Germany are.

“My only advice is not to get agitated,” he said of Germany's future dealings with the US under the president-elect.

“Not only we Germans, but we Europeans in total, we aren't somehow outmatched by him. We ourselves have something to bring to the table.”