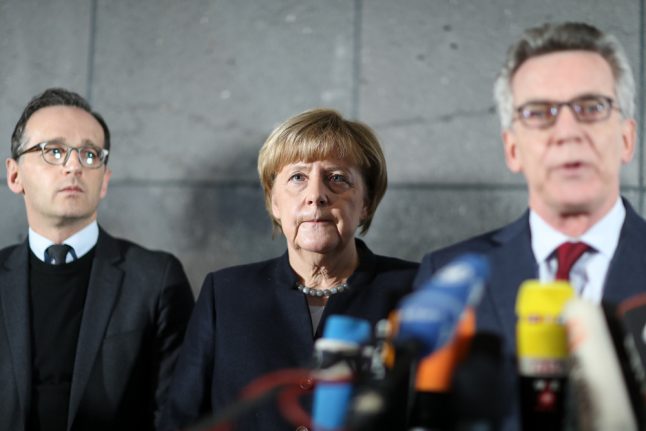 Berlin also wants to pressure countries that refuse to take back citizens who have been denied asylum by Germany, including by cutting foreign aid, said Interior Minister Thomas de Maiziere.

Rejected asylum seekers listed as being a danger to the public by German security services would in the future be detained more easily and longer in the lead-up to their pending deportations, he said.

De Maiziere said the plan showed that, in difficult times, the government could “increase the security of the citizens of Germany without a disproportionate restriction of basic rights”.

The proposed reforms follow the December 19th attack, claimed by Isis, in which a hijacked truck was used to mow down yuletide revellers in the capital, claiming 12 lives.

“We want to do everything possible to ensure there is no repeat of the Amri case,” said centre-left Justice Minister Heiko Maas, presenting the plan with conservative de Maiziere.

The Amri case sparked public anger after it emerged he had already been in the crosshairs of security services and should long ago have been sent back to Tunisia, which for months refused to take him.

Counter-terrorism officials had a detailed file on Amri and had monitored him for months. They knew he used multiple identities, was linked to radical Islamists and had looked up instructions online on how to build pipe bombs.

German security services list 548 Islamists considered “threats to public security” who have lived or currently reside in Germany – a list that included Amri.

Under the proposed new laws, rejected asylum seekers could be placed in pre-deportation custody for up to 18 months – up from three months now – if they are considered a threat.

And people claiming refugee status who are caught lying about their identities would be banned from travelling throughout Germany.

The proposals have yet to be passed by parliament, but seemed likely to get the green light given that the parties of de Maiziere and Maas form a grand coalition with a crushing majority.

Discord, however, continues about other proposals — including a plan by de Maiziere to streamline the country's federal and state-level domestic intelligence agencies, which has already been rejected by some of Germany's 16 states.

Also, Development Minister Gerd Müller of the Bavarian conservative CSU party has argued against cutting aid to uncooperative countries, arguing this would harm their democratic development.

There is also a plan to declare Tunisia, Morocco and Algeria as safe countries of origin, which would make it much tougher for its citizens to claim political asylum in Germany.

But this bill has been held up for months in the upper house over human rights concerns in the three North African countries.