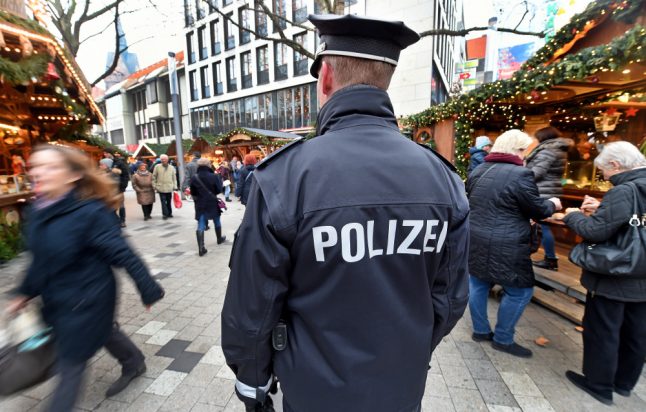 A police officer in Hanover, after the Berlin attack. Photo: DPA.

A Tunisian Isis terrorist killed 12 people when he hijacked a truck and drove into a crowded Christmas market in Berlin. He was later killed in a shootout with police in Italy.

The general feelings of security were shared by most across party lines – especially by voters for Die Linke (the Left Party) at 96 percent. But supporters of the far right Alternative for Germany (AfD) bucked the trend with two-thirds saying they felt unsafe (66 percent).

When asked about whether they believed Germany is “well protected against terrorist attacks”, a smaller majority of 57 percent said “yes”. This was a slight increase since the question was last asked in August when 55 percent of respondents answered yes, following a series of violent incidents in southern Germany.

On July 18th, a young asylum seeker from Pakistan injured five in an axe attack on a train in Würzburg and was killed by police. Within a week, a Syrian man blew himself up in Ansbach, injuring 15 people. Both attacks were claimed by Isis.

Also on July 22nd, an 18-year-old opened fire in a shopping area of Munich, killing nine others and later himself in an attack that may have been inspired by the 2011 Norway massacre by a far-right terrorist, committed on the same date five years before.

According to the ARD poll, whether people say Germany is safe against terror attacks has not changed significantly over the past year. In December 2015, following the November 2015 Paris attacks, 55 percent of Germans said their country was well-protected. And in April 2016, following the bombings in Brussels in March, 58 percent said they felt protected against terrorism.

But the Berlin attack also raised questions about the competency of German security services. The main suspect, Anis Amri, had been investigated by intelligence services in the state of North Rhine-Westphalia (NRW) on suspicion of planning a terror plot and had been categorized as a security threat.

However, when he moved to Berlin in February 2016, a lack of communication between security services in the two states appears to have contributed to him being able to escape the attentions of police.

Trust in police and intelligence services has nevertheless remained relatively unchanged, according to the poll: 88 percent of Germans have great or very great trust in the police, which is an increase of 4 percentage points since October 2016.

Trust in Germany’s intelligence services, however, remains comparatively low, though not drastically lower than before. Just 36 percent of respondents had great trust in them, down by 2 percentage points since last January. And more than half said they had little to no trust in the intelligence agencies.

Little impact on Merkel or her party

Some have speculated as well about what the Berlin terror attack could mean for Chancellor Angela Merkel’s prospects as she runs again in this year’s autumn election.

Merkel herself dropped by just 1 percentage point to 56 percent in terms of respondents’ satisfaction with her work. Interior Minister Thomas de Maizière got a much larger boost of 7 percentage points to reach 57 percent approval since the attack, after which his ministry proposed a major overhaul of Germany’s security apparatus.

The leader of the AfD, Frauke Petry, saw no change in her level of support, remaining at 12 percent satisfaction as in November.

‘Things are better than the past’