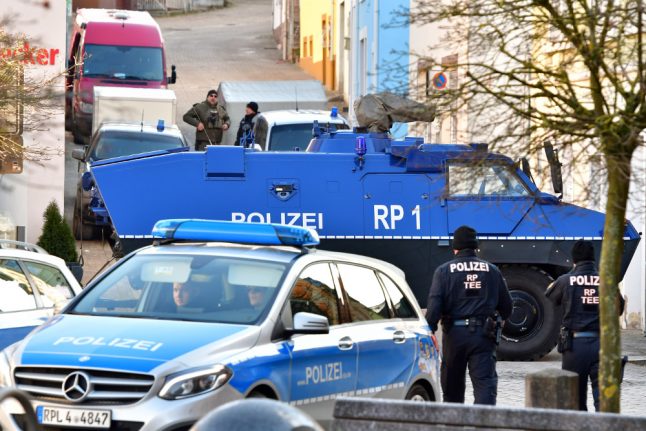 Police transporting explosive materials out of a home in Lauterecken. Photo: DPA.

Officers evacuated 100kg to 150kg of highly dangerous fireworks and other explosive materials from the home of an 18-year-old in the town of Lauterecken, Rhineland-Palatinate starting on Friday morning, according to AFP.

Police are investigating whether the teen was planning a right-wing motivated attack in Kaiserslautern with a 24-year-old man from North Rhine-Westphalia. The two are currently being held in police custody, under suspicion of violating explosives regulations, and of preparing to commit a serious act of violence.

They are being investigated as to whether they belong to a right-wing group. Police said Islamist extremism has been ruled out.

Due to the danger of removing the explosive materials from the house, police evacuated 87 residents from their nearby houses and apartments. The area was also closed off from traffic. Explosives experts then transported the materials out of the home, little by little.

AFP further reported that police and local officials said not only fireworks were found, but also base materials for the production of explosives.