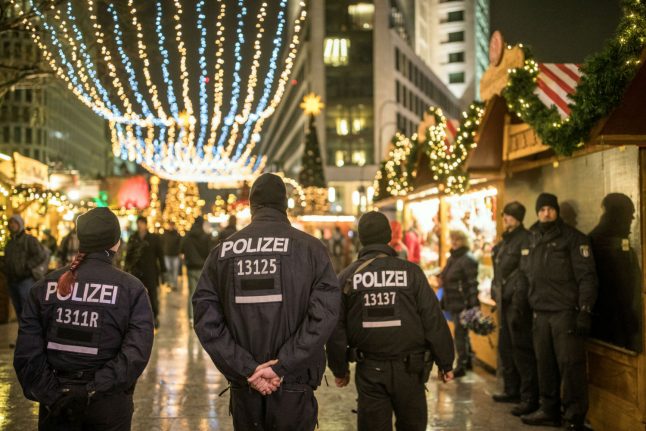 Police at the re-opened Breitscheidplatz Christmas market in Berlin. Photo: DPA
As most of the country was preparing to celebrate Christmas Eve, Germany's under-pressure authorities said hundreds of investigators would be working on the probe throughout the holiday season.
Tunisian Anis Amri, 24, is believed to have hijacked a truck and used it to mow down holiday revellers at a Berlin Christmas market on Monday, killing 12 people in an attack claimed by the Islamic State group.
The rejected asylum seeker was the focus of a frantic four-day manhunt after the rampage, but his time on the run was cut short by Italian police.
Chancellor Angela Merkel on Friday thanked Italy and expressed relief that the fugitive no longer posed a threat, but warned that “the danger of terrorism in general endures”.
She pledged a “comprehensive” analysis of how the known jihadist was able to slip through the net in the first place.
“The Amri case raises questions,” she said. “We will now intensively examine to what extent official procedures need to be changed.”
“How could Europe's most wanted terrorist leave Germany?” asked the respected Die Welt daily on its website, in a nod to the growing criticism of the country's handling of the probe.
Amri was shot dead after pulling out a pistol and firing at two officers who had stopped him for a routine identity check in the early hours of Friday near Milan's Sesto San Giovanni railway station.
He lightly wounded one of the officers before being killed by 29-year-old police rookie Luca Scata, who has since been hailed as a hero.
Police said Amri had shouted “bastard police” in Italian before opening fire.
According to Milan police chief Antonio De Iesu, Amri had arrived in Italy from Germany via France. He had a few hundred euros on him but no telephone.
The Islamic State group released a video Friday in which Amri is shown pledging allegiance to IS chief Abu Bakr al-Baghdadi.
German investigators are now focusing on whether Amri had help from accomplices.
“It is very important for us to determine whether there was a network of accomplices… in the preparation or the execution of the attack, or the flight of the suspect,” federal prosecutor Peter Frank told reporters.
Questions have been raised about whether enough was done to keep tabs on Amri, who was on the radar of anti-terrorism agencies in both Germany and Italy.
Amri's port of entry to Europe was Italy, arriving on a migrant boat in 2011. He then spent four years in prison there for starting a fire in a refugee centre, during which time he was apparently radicalised.
After serving his sentence he made his way to Germany in 2015, taking advantage of Europe's Schengen system of open borders – as he did on his return to Italy this week.
German security agencies began monitoring Amri in March, suspecting that he was planning break-ins to raise cash for automatic weapons to carry out an attack.
But the surveillance was stopped in September because Amri, who was supposed to have been deported months earlier, was seen primarily as a small-time drug dealer.
Germany's anti-migration AfD party, which has blamed the attack on Merkel's liberal asylum policy, surged to a year high of more than 15 percent in a poll on Friday, ahead of a general election expected next September.
Justice Minister Heiko Maas has pledged to examine “how to improve surveillance of potentially dangerous persons” and concrete steps to speed up deportations of illegal migrants.