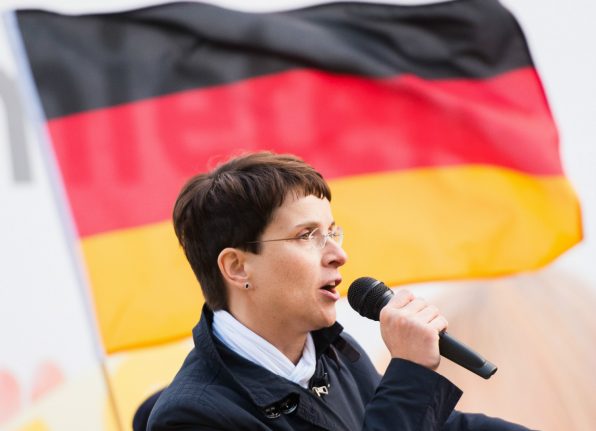 Merkel has been under fire over her decision in September last year to let in hundreds of thousands fleeing war and poverty from mostly Arab and Muslim nations.

The arrival of around a million people over the past two years has deeply polarised society, and the German leader has said that next year's election would be “more difficult” than any other she has contested.

Hours after the attack that claimed at least 12 lives, Merkel admitted: “I know it will be especially hard for us to take if it is confirmed that the person who committed this attack sought protection and asylum in Germany”.

The Islamophobic and anti-immigration populist party AfD wasted no time in laying the blame on Merkel.

“The milieu in which such acts can flourish has been negligently and systematically imported over the past year and a half,” the group's co-leader Frauke Petry said in a statement, in a clear reference to Merkel's decision to let in refugees.

“Germany is no longer safe. It should be the responsibility of the chancellor to tell you this. But since she won't do it, then I'll say it,” Petry declared, demanding “control over our territory, no ifs and buts”.

Marcus Pretzell, also an AfD lawmaker and Petry's partner, went as far as to label the victims of the Christmas market “Merkel's dead”.

Pretzell's comment, which he made only an hour after news of the incident emerged led to strong criticism on social media, with people accusing him of instrumentalizing the victims for his party's political goals.

Cem Özdemir, leader of the Green Party, responded by comparing Pretzell to a hate preacher.

Merkel's popularity has waned over the record refugee influx, although her decision to seek a fourth term in next year's elections was greeted with approval from 64 percent of the population as measures to curb the refugee influx – including through a controversial deal with Turkey – began to show results.

But voters had also punished her over her refugee policy, with her CDU party suffering setbacks in five consecutive state polls, while the upstart AfD saw a stunning rise.

In a world upended by Brexit and the surprise election of Donald Trump, questions are flying on how she plans to counter rising populism.

German Marshall Fund analyst Christian Moelling said the “biggest risk to Merkel is how her own party will react to” the attack.

“Up to now she is the candidate of the conservatives for the chancellor post… but maybe the conservative right-wing will try to get more concessions from her on the questions of internal security and migration,” he told AFP.

What emerges from the investigation into the attack could determine how much of a toll it could take on Merkel politically, said Moelling.

A key question was “whether we see that this is a kind of lone wolf approach, or whether there is a more systematic approach or group behind it”.

An organised attack would “support the case that we have been unsuccessful in scanning the people coming into Germany last year and it could be seen as Merkel's policy leading to this increased risk,” he warned.

For now, most mainstream politicians have been adopting a largely cautious stance.

But Merkel's Bavarian allies, the CSU, who have been among her biggest critics over the refugee issue, are already gearing up for a fight.

“We owe it to the victims, those affected and the entire population to re-examine and re-adjust our entire immigration and security policies,” said CSU chief Horst Seehofer.

Earlier, Joachim Herrmann, the CSU interior minister of Bavaria state, had already called for an open dialogue about the risks that Germany is facing due to the arrival of many refugees.

“We need to talk about this question, what risks do we face now with this big number of refugees here,” he said in an interview with regional radio Bayerische Rundfunk.

The population could not be expected to “keep going like that, in which we face a higher risk of attacks by people from a radical Islamist background.”

But Spiegel Online called for cool heads to prevail, saying “whoever exploits the situation, like the cynics at the AfD are, to incite people against others, is doing the work of terrorists.

“They want to divide us, they want to destabilise use and provoke a cultural war. Their hate is aimed at creating new hate,” it warned.