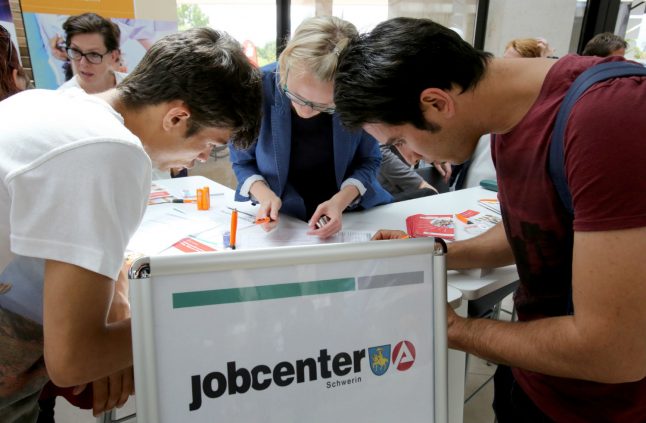 Refugees at a job fair in Schwerin. Photo: DPA

A total of 34,000 refugees have found work in Germany over the past 12 months, the figures released on Monday by the government’s Institute for Labour Research (IAB) showed.

Almost quarter (22 percent) of those who have found work are on temporary contracts.

The numbers are for refugees out of the eight most important countries of origin, including Syria, Iraq, Afghanistan and Eritrea.

“If we manage to get 50 percent of them into work which pays for their lives in five years, that’d certainly be a success,” said Joachim Möller, director of the IAB.

But he cautioned that “it would be an illusion to believe that we will manage to find jobs for a decent proportion of refugees in well-paid industry jobs like car manufacturing.”

Möller added that temporary jobs were important to help refugees get a foot in the door.

“Many companies are sceptical, so temporary work can help them get a feel for someone.”

The refugee influx has also created between 50,000 and 60,000 jobs for Germans, with extra jobs in professions such as teacher and social worker likely to be needed for years to come, according to Möller.

“If you think back to reunification Germany has already overcome very different challenges to the refugee influx.”

Möller says that what effect the refugees will have on the German economy can only be understood in five or six years.

“It probably won’t lead to us making money, but diversity can have positive effects.”

The government assessment was considerably more downbeat than a report by the Kiel Institute for the World Economy published last week, which suggested that by the end of 2018, more refugees will be employed than out of work.