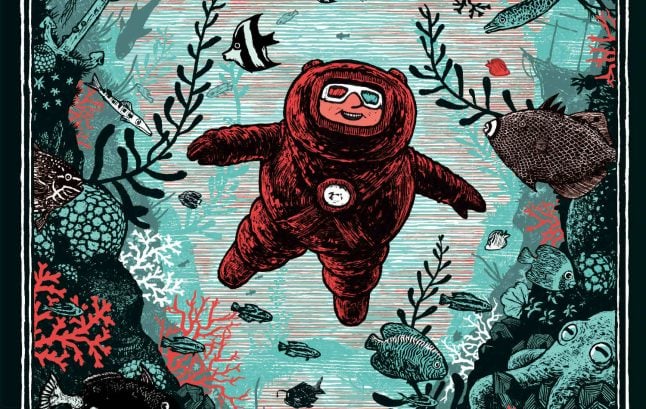 Hardly seen in bookstores just a few years ago, German-produced graphic novels now have their dedicated shelves, as not only homegrown artists but also foreign ones find inspiration in Berlin.

“It was when I moved here that I felt a need to write,” said Spanish author Alberto Madrigal, who moved to the German capital in 2007 and has since produced three graphic novels including his most recent, “Berlin 2.0”.

The key reason drawing artists and musicians to Berlin apply too to graphic novelists – the cost of living is lower than in most other European capitals.

But Berlin's tormented history – from the excesses of the Weimar era to Nazism to the stark division between democracy and communism – also serves as a gripping backdrop for any novel.

It is no accident therefore that graphic novels produced here are less in it for a chuckle than aimed at making a political statement.

Hamed Eshrat describes in “Tipping Point” his family's flight to Germany after Ayatollah Khomeini took power in his homeland Iran in 1979.

An East Berlin-born author who goes by the name Mawil told the story of the fall of the Berlin Wall through the eyes of a schoolboy in “Kinderland”.

In “Madgermanes”, Birgit Weyhe depicts the fate of Mozambican workers sent to East Germany, while Reinhard Kleist describes the horrors of the Nazi-run death camp Auschwitz in “The Boxer”.

“The number of authors who are politically engaged has exploded. The new generation likes to deal with these intelligent subjects,” said Sylvain Mazas, who made Germans laugh with “This book helps me to resolve the Middle East conflict, get my degree and find a wife”.

Prior to the last decade, Germany's homegrown illustrated book scene was largely made up by just a handful of authors.

Among the best known is Ralf Koenig, who tickled generations at home and abroad with his gay-themed comics, or Walter Moers, who poked fun at Hitler.

But the fall of the Wall brought a group of East German artists, who were trained in techniques that had been abandoned by art colleges in the West, to teach at the Berlin-Weissensee art school.

The group became known as Germany's comic avant-garde and went on to have a powerful impact on younger generations of graphic novelists.

Mazas, who like Mawil and Eshrat were all trained at the school, said that “it has for a long time been a very political place”.

At around the same time, Swiss publisher Edition Moderne began producing German translations of foreign graphic novels, including from France and the United States where the market is far bigger and more mature.

Germans, many who were raised on a diet of Mickey Mouse and Tintin comics, began to turn their attention to these graphic novels as well.

Berlin publishers have steadily emerged, including Reprodukt in 1991, Avant-Verlag in 2001 and Jaja-Verlag in 2011. Initially, these also produced German translations, but later moved on to homegrown titles.

German graphic novelists slowly “found recognition at home and abroad, while until 2005, there were only one-way translations,” said Vincent Ovaert, cofounder of “Our Taste” — the first gallery dedicated to graphic novels in Berlin.

Avant-Verlag's co-founder Johannes Ulrich noted that the proportion of German-produced works is now “growing, not spectacularly, but it's growing”.

“Now I have 10 people working on their books who are all from Germany,” he said.

Nevertheless, publishers acknowledged that the industry is in its early stages and far off the scale of French or US equivalents.

Experts estimate the German market to be only one-tenth the size of the French. A strong title can sell between 3,000 and 4,000 copies in Germany, Ulrich said.

He recognised however that “while we reach out to a more diversified readership of 25 to 80 years, we hardly sell anything to those who are younger.”

Mathieu Diez, who heads the Lyon graphic novel festival, said that even though the German market has “everything in place, there still isn't great interest from the public abroad.”

Next year, however, the festival will host a delegation of German authors who will showcase their works in two exhibitions.

But Diez also cautioned that the graphic novel market is tough going, as “quality publications run up against the flood of French publications” which appear in the thousands a year.