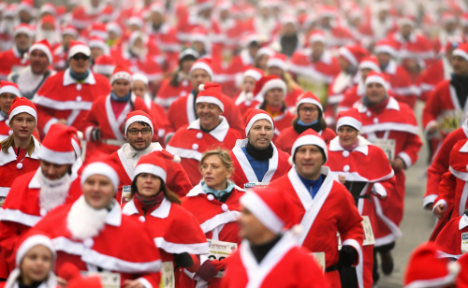 The Santa Claus costume was compulsory, but runners wore an array of different running shoes and tracksuit bottoms.

One runner jogs through the cold. Photo: DPA
The distance is up to each runner, but the five-kilometre circuit was most popular, according to the runners' club that organized the event.
Instagram user Stefan Lück snapped a quick photograph while running of the sea of red in front of him.

The fastest male Father Christmas finished the longer ten-kilometre course in 33 minutes and ten seconds, while the fastest female Santa made it in 44 minutes and nine seconds.

The red-clad participants disappeared into the fog. Photo: DPA

Michendorf wasn't the only place to host a Nikolauslauf – Cologne and Tübingen were among others to put on runs, but did not insist on participants wearing the costumes.

READ MORE: Nikolaus: the saint who gave gifts before Santa

The Tübingen Nikolauslauf half marathon has been going since 1976, and this year 2,662 runners crossed the finish line, according to the event website. Sabrina Mockenhaupt finishing first among women with a time of one hour, 20 minutes and one second, and Jens Ziganke finished first among men at one hour, ten minutes and 33 seconds

Mockenhaupt was photographed winning the race without a costume, alongside a keenly dressed Santa Claus.