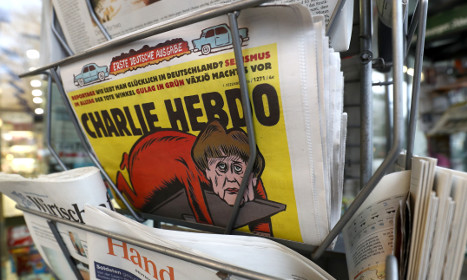 1. Some of the jokes are quite niche No, we didn't get the joke either. Photo: DPA.

You really have to be paying attention to your news if you want to get some of the more obscure cartoons that are featured in this edition.

One such niche joke is about the Belgian cartoonist Hergé, who created The Adventures of Tintin.

In order to understand the cartoon in Charlie Hebdo, you have to know that a Tintin drawing was sold at auction for a record €1.5 million in November. The cartoon then jokes that the auction house is also selling off leftovers from Hergé's eraser with a starting price of €900,000.

It's not so funny anymore now that it's been explained, right?

Hebdo also expect Germans to be up-to-date on their French current affairs in order to understand some of the content.

So they're not making it easy for you to laugh.

2. There's a lot of French news for a German edition This guy is in it a lot, François Fillon. Photo: DPA.

With article titles like “An evening in France” and sections that revolve around France's newest presidential candidate François Fillon, you can't really pretend that the guys at Charlie Hebdo have created an entirely separate German magazine or sister paper just yet.

In fact, this edition's coverage revolves around the recent candidacy of Fillon almost as frequently as it does Angela Merkel.

Much of the magazine's short 16 pages is content translated directly from the French edition into German, so while it is in German, it is not solely about German current affairs.

Some people eager for more German-specific news might be disappointed to learn this, given the price tag is a rather hefty €4.

On the other hand, the entire centrefold is dedicated to the theme “Who lives happily in Germany?” Various members of German society are asked their opinions on Germany and what being German entails.

3. It's not as provocative as we expected The cover of Charlie Hebdo in response to the 2015 terror attack on its offices. Photo: DPA.

Charlie Hebdo arrived in Germany with quite a reputation. Since the January 2015 terror attack on its offices, in which 12 staff members were assassinated, it has become a symbol of free speech for many.

Its supporters say it fearlessly defends the right in a liberal society to offend. Some critics though, have accused the magazine of anti-Semitism and Islamophobia.

In January this year, it ran a particularly controversial drawing in the wake of sexual assaults in Cologne seen as implying that Alan Kurdi, a Syrian boy who drowned in the Mediterranean, would have gone on to sexually assault women had he lived.

With such a mixed reputation, we didn't know what to expect.

So upon opening this edition, you'll be surprised to find it's not all controversy. Titles such as “42,000 tonnes of nuclear waste in an old salt mine” and “The atomic lobby will cost us dearly” are about the environment, rather than poking fun at religion. They are eye-catching, but not for the reasons you might expect.

4. It doesn't hold back when it comes to Merkel Many of the magazine's German-specific cartoons focus on – surprise, surprise – Angela Merkel and the news that she is seeking a fourth term as Chancellor.

The German Chancellor does not get off lightly.

She is the first thing you see when you walk into a newsagent. The cover pokes fun at her running for a another term by drawing comparisons with the recent Volkswagen emissions scandal. A VW worker tells an exhausted looking Merkel that if you get a new exhaust, you can last another four years.

Merkel also stars inside, where the cartoonists poke fun at her refugee policy. In one drawing, three refugees hold her aloft on an elaborate chair as she shouts “higher.” Another reads “Merkel, the woman's got Eier'”. (Eier literally means eggs but is also slang for balls). With two refugees sitting under her skirt, she adds “roughly 1.5 million of them.”

She is also depicted as the “Last bastion of the free world”, dancing atop a European flag, naked but for a pair of nipple tassels.

5. Okay, so it is still quite provocative Despite being generally more toned down than we expected, the German magazine still has plenty to get people riled up.

A cartoon on the back page labelled “Advent Assassination Thwarted” shows an Islamist terrorist standing next to a Christmas tree made out of AK-47's saying “Hands off the Christmas tree, it's for the little one”.

Another revolves around artist Jeff Koons presenting an artwork to commemorate the 2015 Paris attacks. It doesn't sound explicitly controversial until you see a piece that looks like a maimed human with a “stub of remembrance” arrow pointing to its severed leg.

Lastly, the new edition has a pop at Frauke Petry – leader of the far-right Alternative for Germany (AfD) – pointing out that she's already got the haircut of a famous German far-right leader of the past. Now she only needs his infamous moustache.