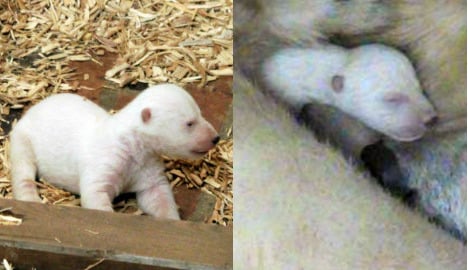 Berlin reported that the new cub was looking healthy as it reached one month old, releasing new photographs on Friday. The new cub has only opened its eyes for the first time in the last few days. Photo: Tierpark Berlin / DPA

The zoo also reported that surveillance footage shows its mother Tonja breastfeeding her cub around every two hours.

The little bear currently weighs around three kilograms, increasing from exactly 600 grams when it was born. The cub is expected to grow quickly as polar bear milk contains 30 percent fat.

It opened its eyes for the first time a few days ago, but can still see very little, like many other mammals in the early stages of infancy. However, Munich's Hellabrunn zoo also announced on Thursday that their bears Giovanna and Yoghi had welcomed a new member into the family on November 21st.

Three years after Munich bear Giovanna gave birth to the twins Nela and Nobby, she has brought another new cub into the world.

Nela and Nobby with Giovanna in 2014. Photo: DPA

In February, Nela and Nobby left Munich, the former heading to Emmen in Holland, and the latter to Doncaster in England.

The Munich cub is yet to open its eyes. Photo: DPA

The zoo is so far unsure of the newborn's sex so it does not yet have a name, but like the Berlin bear, it also weighed 600 grams and was around 20 cm long at birth. Hellabrunn zoo also released footage of the new arrival as it stretches under its mother's firm embrace.

In Berlin, two zoo keepers enter the enclosure daily, but do not approach the nursing area so that the mother and baby are not disturbed.

The new cub will join its mother a well as other bear Wolodja in the Berlin enclosure. Mother Tonja plays with Berlin's other polar bear Wolodja in their enclosure in March. Photo: DPA

Tonja gave birth to twins on November 3rd, but one of them the died in the following week. It was the first polar bear birth in the zoo for 22 years.

The surviving cub will have its first veterinary check-up in one to two months. Still of footage of Tonja with two babies on November 4th. Photo: DPA

Polls are now open to decide which one is our favourite friend from the Pole! Make your comments below…