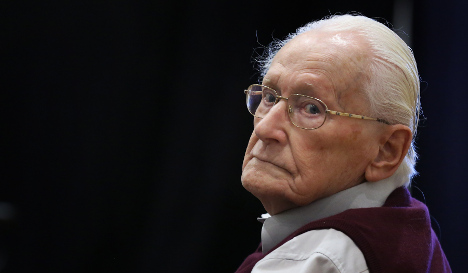 Oskar Gröning, now 95, was found guilty in July 2015 of being an accessory to the murders of 300,000 people at the camp and sentenced to four years in prison.

He and co-plaintiffs in the case, many of them elderly survivors of the Auschwitz death camp in occupied Poland, had challenged the verdict on various grounds.

But the Federal Court of Justice (BGH) threw out the appeals, meaning that the verdict by the lower tribunal in the northern city of Lüneburg is final.

“I can confirm that today we received the BGH ruling dating from September 20th that the appeals by Mr Gröning and the co-plaintiffs were rejected,” defence attorney Hans Holtermann told AFP.

The high court's decision was keenly awaited as a test of a legal precedent for prosecuting former Nazis which changed in 2011 with Germany's landmark conviction of former death camp guard John Demjanjuk.

That case determined that it was not necessary to prove that a defendant had committed specific atrocities if he worked at a death camp and was thus a cog in the Nazi killing machine.

However Demjanjuk remained not guilty under German law until his death in 2012 because the appeals process had not run its course.

Gröning has been living at home despite his conviction, awaiting the BGH ruling.

Prosecutors must now determine whether Gröning is fit to serve his sentence, which is considered unlikely given his advanced age.

Lawyers representing 50 co-plaintiffs said in a statement the BGH decision was “an important correction of earlier jurisprudence, even if it comes much too late”.

Christoph Heubner of the Berlin-based International Auschwitz Committee, which represents camp survivors, said he was relieved by the decision.

“The BGH ruling finally makes clear that everyone who was part of running Auschwitz shares responsibility and guilt,” he said in a statement.

“This will send a lasting message for future trials related to genocide.”