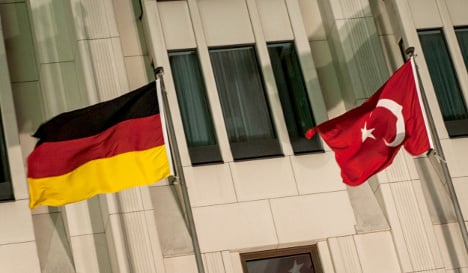 Broadcasters NDR and WDR reported that the state prosecutor’s office in Bremen had initiated an investigation, which a witness said had to do with a Turkish agent conspiring to kill two people active in the Kurdish community outside Turkey.

The Bremen office then referred the case to federal prosecutors in Karlsruhe
According to information obtained by the broadcasters, the Karlsruhe authorities are aware of the case, but are only looking into suspicions of espionage.
The investigation started with an anonymous statement from a woman to a newspaper that is close to the Kurdish Workers’ Party (PKK), which is banned in Germany. She said that she knew of a Turkish agent who had been disguising himself as a journalist in Bremen for two years. He had set up interviews with Kurdish functionaries so that he could spy on them.
She was able to corroborate her account with numerous documents, including photographs, copies of passports and recordings. The woman brought these materials to both the police and the broadcasters.
She also reported that there was a murder plot, in which two other agents were involved. Investigators are determining whether the woman’s testimony is reliable.
It is not clear where the alleged Turkish agent is now.
According to the woman’s lawyer, she is currently living in a secret location. She was interrogated by the Federal Criminal Police Office and is under police protection.
The case is also being reviewed by the interior affairs committee of the German parliament (Bundestag) and is supposed to soon be discussed by the parliamentary control committee.
One of alleged targets of the murder plot was Yüksel Koc, who lives in Bremen and is active in several Kurdish associations. The second was Remzi Kartal, who lives in Brussels and is the chair of the Kurdish organization Kongra-Gel.
NDR and WDR reported that the two men appeared to be shocked by the alleged plot in an interview, but found it believable. Last year, they had started receiving messages with death threats.
And after the woman spoke out, they received a message stating: “Be glad that this whore told you all this… You will always be out target until you are dead.”
Shortly after the failed coup attempt in Turkey in July, an intelligence expert told The Local that Ankara has an estimated 6,000 informants in Germany who have been putting pressure on Kurds and others perceived to b opposed to the government.
“Turkey's internal conflicts between… Kurds and Turks have been brought into Germany, and are impacting the internal peace,” expert Erich Schmidt-Eenboom told The Local in August.

When three PKK activists were murdered in Paris in 2013, suspicions were raised about the involvement of the MIT. The Times reported in September that MIT had a dissident murdered in London in 1994.