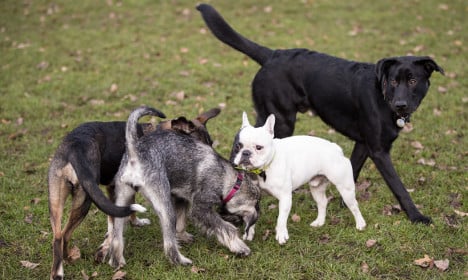 Hamburg implemented the new rule on Sunday as the H5N8 virus spreads across the country, for fear that dogs could spread the virus further if they come into contact with a dead bird. Cats are also now not permitted to wander freely.

The president of the Friedrich-Loeffler Institute (FLI), Thomas C. Mettenleiter, told DPA that there is no evidence that mammals can become sick from H5N8.
But the ministry of agriculture in Mecklenburg-Western Pomerania explained that there is still concern that pets could spread the virus if feces of infected animals gets on their paws or fur.
The aggressive bird flu H5N8 has now been identified in 11 out of 16 German states, and a central crisis committee of experts met on Tuesday to discuss the situation.
“We are taking the spread of bird flu in Germany very seriously,” said Agricultural Minister Christian Schmidt on Monday.
Since the beginning of November, the virus has been detected in seven different farming flocks in northern Germany, including within a large farm of around 30,000 chickens in the state of Schleswig-Holstein.

The highly contagious H5N8 virus is transmitted by birds on migration routes heading south for the winter. The FLI also believes that infected poultry populations on farms could have either come in direct contact with infected waterfowl, or in some cases indirectly through feed and water supplies that had been polluted by wild birds.

The sub-type was first identified in Denmark. Austria, Switzerland, Hungary and Poland have all also reported confirmed cases.

Several countries – like Israel, Japan and South Korea – have now forbidden the import of German chickens, ducks, geese and turkeys.

In parts of Germany, agricultural authorities have ordered that all poultry be kept caged so that they do not become infected by wild birds.

On Tuesday, thousands of geese in Schleswig-Holstein were slaughtered due to concerns about the virus.

And ostrich farms have also been indirectly impacted by the virus.

“I have now registered my animals for slaughter,” said ostrich rancher Harald Pfeiffer from Canzow, Mecklenburg-Western Pomerania. This is because he was not able to get an exemption from the requirement to cage his birds, and “you cannot lock up ostriches in good conscience”, Pfeiffer explained.
Other states have made exceptions for ostrich farmers.