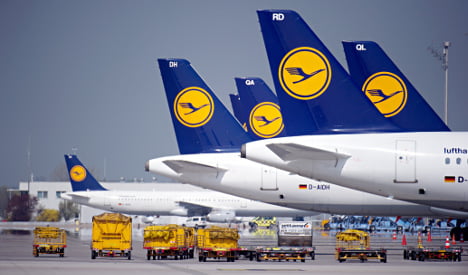 The 24-hour stoppage, called by the pilots' union Vereinigung Cockpit, will start at midnight and affect Lufthansa flights at airports across Germany.

Out of the roughly 3,000 planned short- and long-haul flights, 876 will be cancelled due to the strike, “affecting some 100,000 passengers”, Lufthansa said in a statement Tuesday.

Lufthansa said on Tuesday that it is seeking a court-ordered interim injunction to stop the strike. A labour court in Frankfurt is set to discuss the motion on Tuesday afternoon

The Lufthansa pilots going on strike Wednesday are demanding a pay rise of an average of 3.66 percent per year, retroactive for the past five years.

The union says pilots have endured a wage freeze over that time and suffered a “significant loss of purchasing power” due to inflation, while Lufthansa has made billions in profits.

It had offered a 2.5 percent wage hike.

Meanwhile a separate walkout by cabin crew at Lufthansa's low-cost airline Eurowings led to the cancellation of more than 60 flights at airports in Hamburg and Düsseldorf on Tuesday.

The industrial action was called by Germany's biggest services union Verdi in a row over pay and working conditions.

The stoppage began at 5am and was due to end at 8pm.