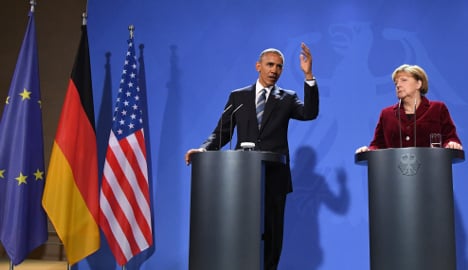 Trump's election upset has rattled European nerves, as he appeared to call into question a near 70-year-old security shield for US allies under NATO, and vowed to withdraw from hard-fought deals on the climate and Iran's nuclear programme.

His friendly disposition towards Russian President Vladimir Putin also raised questions on his attitude toward Moscow's backing for President Bashar al-Assad in the Syrian war as well as Russia's role in the conflict in eastern Ukraine.

Ahead of the talks, Obama sounded a note of cautious optimism that Trump could change his position once he takes on the role as president.

“There's something about the solemn responsibilities of that office … that forces you to focus, that demands seriousness,” Obama said at a press conference following a meeting with his host Chancellor Angela Merkel.

“And if you're not serious about the job, then you probably won't be there very long. Because it will expose problems.”

But Obama also stressed the importance of a united Europe, and urged the bloc not to take for granted the transatlantic relationship that has been built up over decades.

“The EU remains one of the world's great political and economic achievements, and those achievements should not be taken for granted,” he said.

Friday's meeting between Obama and the leaders of Britain, France, Germany, Italy and Spain is the first of its format since Trump's election.

“The meeting will allow for an exchange of views openly and informally on key international issues,” said the Elysee in a statement, pointing to hot-button topics like the US-led coalition's battle against the Islamic State organisation in Syria and Iraq as well as Europe's migrant crisis.

Citing the conflicts in Syria and Ukraine, Obama stressed that he hoped Trump, who has voiced admiration for President Vladimir Putin, “is willing to stand up to Russia where they are deviating from our values and international norms”.

He said Russia was a military superpower with “influence around the world” but cautioned Trump against the temptation to “cut some deals with Russia” that hurt smaller countries because it may seem “convenient at the time”.

But the talks in Berlin also come as the EU faces unprecedented challenges that threatened to rip it apart. British Prime Minister Theresa May, whose country shocked the world when it voted to quit the EU, is due hold talks over the issue on the sidelines with Merkel.

France's President Francois Hollande is grappling with record low ratings ahead of next May's election that could see far-right Marine Le Pen reaching the second round run-off vote, or even winning outright.

But Obama urged the parties to focus on the whole, noting that “the achievements that we have seen on this continent in contrast to a divided Europe of the previous century, are ones that remind us of how important it is that we work together.”

Ahead of potentially fractious negotiations within the European Union over Brexit, Obama called on Brussels and London to work towards a future relationship that “preserve as closely as possible the economic and political and security relationships between the UK and EU”.

Obama's choice of Berlin as the stop for his European farewell tour has been interpreted by some observers as the passing of baton of the defence of liberal democracy to Merkel.

In a departure for the leader of a country that once took lessons from the United States on basic freedoms, Merkel's congratulatory message to Trump tied future cooperation with common democratic values.

Giving a ringing endorsement for Merkel before she announces if she will run for a fourth term in next year's elections, Obama acknowledged that she would have heavy international burdens to shoulder.

“I wish I could be there to lighten her load somewhat. But she's tough,” said Obama, in his sixth official visit to Germany.