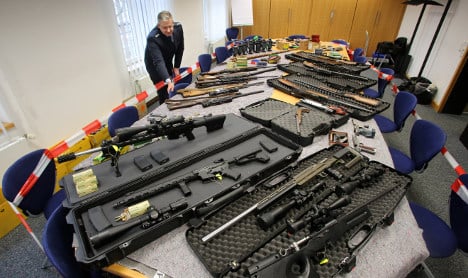 The pair’s stash included 12 rifles – some of which had magnifying scopes – nine pistols, three air-pressure guns and one semi-automatic firearm. Police also discovered more than 20,000 rounds of ammunition.

The two Reichsbürger, aged 40 and 57, had weapons permits as marksmen, but authorities had decided to revoke them because they started to doubt the men’s fitness for possessing weapons.
People who are part of the Reichsbürger scene assert that the German Reich, or even Prussia, still exists, with some groups establishing their own “government”. Therefore they often come into conflict with officials for refusing to pay taxes or forging their own forms of identification.
Photo: DPA
Officials justified their decision to seize the weapons from the men in Solingen last week, saying that both had written a statement contesting the existence of the Bundesrepublik and rejecting its laws, all while using a “harsh diction”.
“We currently cannot rule out that we may have to return the weapons,” said a police spokesman from Wuppertal, in the western state of North Rhine-Westphalia.
Also on Thursday, in Sögel, Lower Saxony, six police officers were injured during a raid on a Reichsbürger, who attacked the officers with pepper spray. The officers had an arrest warrant for the 42-year-old and as he tried to flee from them, the Reichsbürger used pepper spray. The officers were lightly injured, though one had to be taken to hospital.
The Reichsbürger was also injured during the encounter and was also taken to hospital.

German intelligence considers a number of Reichsbürger to be part of the right-wing extremist scene and has been monitoring them.

Officials have been more vigilant of Reichsbürger after one man who identified with the movement fatally shot a police officer during a seizure of his guns last month.

Interior Minister Thomas de Maizière said in reaction to the shooting that the government would re-evaluate the movement, with some advocating weapons bans and better monitoring of its affiliates.
DPA estimated in October that there were more than 1,000 Reichsbürger throughout Germany. North Rhine-Westphalia alone has around 300 Reichsbürger, according to Germany's domestic security agency.
Photo: DPA