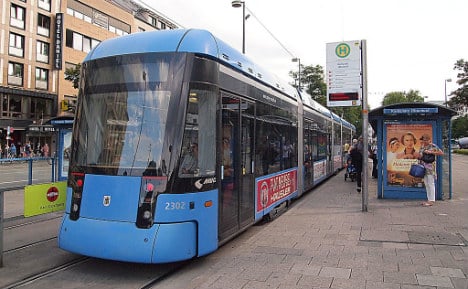 The man started arguing with the 17-year-old after he felt provoked by the way she was looking at his crying child, police reported on Friday.

In the incident, which took place on the number 17 tram on November 6th, the attacker pulled out a 14cm truncheon, known as a Kubotan, and struck the girl across the arm with it.

When her 18-year-old boyfriend tried to come to her protection, the older man struck him three times across the head.

The teenager was able to soften two of the blows with his hand, but still suffered a cut to the head.

Police arrested the 29-year-old at the scene of the crime.

Federal police reported a 9.3 percent drop in incidents of assault on public transport earlier in November.
The statistics, which were for the year 2015, recorded crimes which took place in the jurisdiction of the federal police, who are mainly responsible for securing borders and transit hubs like train stations and airports.
Overall the federal police figures did show a 12 percent increase in thefts and a 2 percent increase in fare dodging.
Federal police do not record crimes which take place on inner city transport.