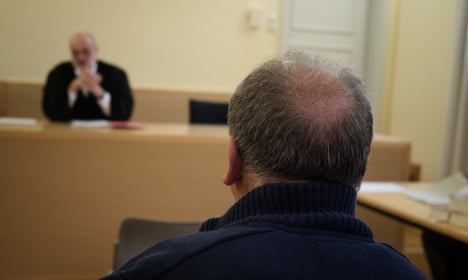 The man in court in Wunsiedel, Bavaria. Photo: DPA.

The sign was posted by a 54-year-old man in his shop in Selb, Bavaria, stating “Asylanten müssen draussen bleiben” (refugees must stay outside) along with a picture of a muzzled dog.

A court in Wunsiedel on Thursday sentenced the man to pay €1,800 to two kindergartens. He was also given warning. If the 54-year-old does not pay the fine, he faces an even steeper one of €4,950.

The prosecution had advocated for a higher fine against the store owner from Selb, amounting to €6,600. The crime of incitement of hatred can also be punishable by up to five years in prison.
The judge said that the image of the dog with the sign was important in determining the man’s conviction.
The prosecution had argued that the shop owner had used the dog picture to equate refugees to the canine animals, which are often deemed too dirty to be allowed inside supermarkets.
“The crux of the matter was the dog,” said judge Roland Kastner.
The judge went on to explain that “if the man had simply written on his door: 'there's nothing for refugees here' without the dog,” that would have been within the man's rights to free speech. It was the picture of the dog that made the difference for the court.
The lawyer of the small business owner had argued that his client had a right to freedom of speech and should not be convicted, claiming that the defendant had not maliciously intended to disparage anyone.
The defence lawyer further argued that the man could not be considered a racist: he had been in a relationship with a Russian woman for ten years and had friends who were foreigners.
Broadcaster N24 noted that the word that the man used for refugees, Asylanten, is considered a derogatory term by many.
The man also told police that he had had negative experiences with people he identified as “refugees”: two men had once smoked a joint inside his shop near flammable materials and he said he therefore “did not need such people”, according to police.
After German media had first reported on the sign in August, the man took it down. His lawyer told the court that in reaction to the sign, someone had smeared feces on his shop window and loosened the lug nuts on his car.
“The sign I had in my shop had no racist or right-wing background,” the man had written in a statement to the town mayor, adding that he greatly regretted the sign.
“I did not imagine the negative consequences that it would have for the city of Selb and for the business world.”
The judge on Thursday spoke of the man's “stupidity”, saying he thought the man had not “expected that the sign would make so many waves.”