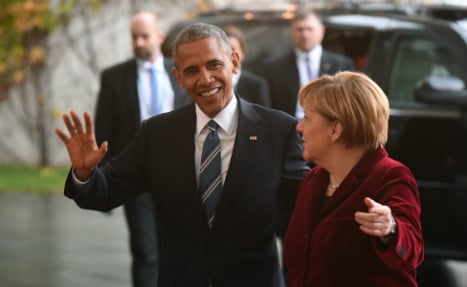 “If I were here, if I were German and I had a vote, I’d support her,” Obama said during a joint press conference with the Chancellor.

“I don't know if that helps or hurts.”

Merkel herself said that she would decide on whether to run for a fourth term at an “appropriate time”.

Both leaders praised one another as well as the friendship and cooperation they had shared over the past eight years.

Merkel said she would keep an “open mind” to working with president-elect Donald Trump.

“I am very much impressed that in spite of a very tough election campaign in the US… the transition is going smoothly,” Merkel said.

“This to us is a sign of encouragement that we will continue the cooperation that we have built with the United States.”

Speaking to broadcaster ARD and magazine Spiegel before the press conference, Obama said of Merkel: “She has great credibility and she is willing to fight for those values in a way that is very, very important.

“I’m glad that she’s there and I think that the German people should appreciate her, certainly I’ve appreciated her as a partner.”

This statement follows previous utterances of approval made by Obama for the German leader.

Before he took off on his final trip abroad as President, he described Merkel as “probably my closest international partner these last eight years.”

When he last visited Germany in April, he said he was happy to know she would still be in office after he was gone.

“The world will profit from her steady and meaningful presence,” he said at the time.

The full interview is to be released later on Thursday evening.