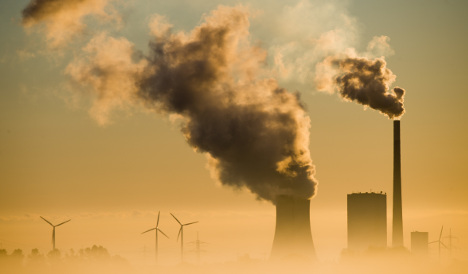 The Climate Change Performance Index released on Wednesday by Climate Change Network Europe and Germanwatch rated 58 countries on how well they work to prevent climate change.

The rankings were based on evaluating each country’s emissions levels, development of emissions, renewable energies, efficiency and climate policies.
The report also evaluates countries’ efforts to implement the Paris Agreement on climate change to keep rising temperatures within 2C (3.6F) above pre-industrial levels, which the German parliament ratified in September.
Germany fell to 29th place in the ranking, down from 27th last year, ranking right behind Mexico, the Netherlands, the Slovak Republic, Greece, the Czech Republic and Egypt at number 23.
“Germany continued its downward trend,” the report noted. “Although the country remains in the group of relatively good performers with respect to renewable energies (rank 18), Germany is not on track to reach its 2020 emissions reduction targets.”
The report goes on to say that Germany’s negotiations for a long-term climate strategy have been “dominated and continuously delayed by the self-serving interests of the coal industry and some of the other energy-intensive industries”.
Germany was rated “good” for shifting more towards renewable energies, and also did well for its climate policy, but it was rated poor for all other categories. CAN Europe director Wendel Trio also noted in a statement that Germany risks “losing their leading role in renewable energy development”.
“Emerging economies are catching up in the progress of transitioning their energy systems and EU countries have to raise ambitions if they want to uphold leading positions,” Trio added.
On Monday the German cabinet agreed on a climate protection plan with new targets for reducing CO2 emissions, which some have criticized for not doing enough to withdraw from the use of coal.
Wednesday’s index did not place any countries in the top three slots for being “very good”, but France was ranked the highest, followed by Sweden and the UK.
The worst countries on the index were Saudi Arabia, at the very bottom, as well as Japan and Kazakhstan.