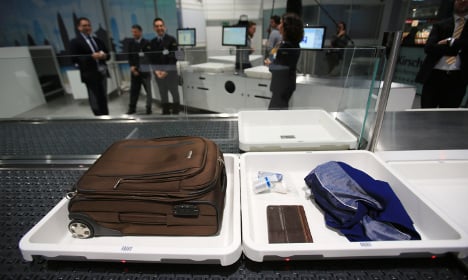 The idea is to allow veteran flyers to navigate more quickly through the checks and go ahead of those who are slower and still must, for example, remember to take all the coins out of their pockets.
When travelers first step up to the conveyor belt for hand luggage, there will be five trays already lined up in order, allowing five people at a time to start arranging their belongings for scanning. Whoever does not need help can simply go ahead and place their items in the trays, and then proceed directly to the body scanner. There is also a “sitting island” for those who must take time to remove their shoes.
The area in general provides more space for travelers than typically narrow security sections.
“‘Easy Security’ follows the principle that every air traveler can basically walk through the control process at their own tempo, without hindering other passengers, or being hindered themselves,” the airport wrote in a statement on Tuesday.
“This makes security for all participants more clearly arranged and relaxed.”
The body scanner stage is also faster, lasting less than one second, and it allows travelers to keep their hands at their sides instead of raising them above their heads.

The system was created by the federal Interior Ministry and the German Aviation Association (BDL) and is intended to bring more calm to the place in the airport that tends to cause the most stress, said Cologne Bonn airport boss Michael Garvens, who also called the system a “quantum leap”.
“We have completely redefined the security control process,” said Lufthansa security leader Karsten Benz, whose company also participated in developing the system..
And the system definitely needs a sort of revolution in light of higher demand: In the first six months of the year, the number of travellers at airports rose nationwide by 2.9 percent to 103.3 million – about 20 million more than Germany’s population. But since airports have not increased in size, more speed and efficiency to get people through security was needed.
Only time will tell whether the new Easy Security system is actually an improvement on the previous method, and this will be reviewed after six months. The old process will still be in use for some passengers at Cologne Bonn airport.
If tests show that the system works, it will be implemented at other airports across the country.
“The new system provides not only security, which was already there, but also earns the approval of passengers through its optimized processing,” said Federal Police division leader Karl-Heinz Weidner in a statement.
“Therefore Easy Security is the trend-setter for airport security in Germany.”