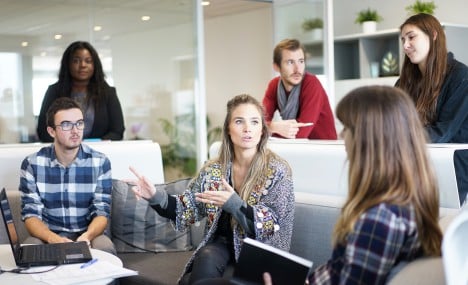 After dropping out of the top ten countries for English skills worldwide last year, Germany made a comeback in 2016, an annual study shows.

Germany is now the ninth best country globally for non-native English speakers, according to the English Proficiency Index, released by Education First (EF) on Tuesday.

The report praised Germany for “the huge efforts made to improve class standards” in recent decades, noting that making English an obligatory foreign language had had a large impact on adult proficiency.

Overall Germany was placed in the proficiency band High, meaning that the average German tested had an English standard equal to a B1 level in the Common European Framework of Reference.
Seven countries – led by the Netherlands with a score of more than 72 – were placed in the Very High proficiency band, meaning they had an English standard equal to the B2 level.

When broken down for Germany, the report revealed considerable discrepancies between regions and the sexes.

English standards are best in the northwest of the country, where Hamburg leads the pack with a proficiency level of 64.86 on the index. Bremen and Lower Saxony, both also in the northwest, had the second and third best scores respectively.

Berlin also ranked impressively. Despite having one of the worst education systems in the country, the capital still came fifth out of Germany's 16 federal states.

Saarland, where the state government prioritizes French as the second state language, was the region with the worst English skills, with a score of about 56.

German women, meanwhile, have a more fluent turn of phrase in the global language than their male counterparts, scoring 63.45 on the index in comparison with 59.68 for men.

Adults in the Netherlands were the best non-native English speakers in the world, followed by those in Denmark and Sweden, according to the study. Laos, Libya, and Iraq occupy the bottom of the rankings.

“In a volatile global economy, English proficiency is one of the few skills with proven ability to generate opportunities and strengthen employability,” said Christen Bagger, vice president at EF, in a statement.

“It takes a great deal of effort and investment to steer a country or company towards a future with an English-speaking workforce. The EF EPI addresses these challenges and prompts global discussions about the best practices of language education.”

The data for this sixth edition of the study was calculated using results from 950,000 test takers who completed three different EF English tests in 2015.