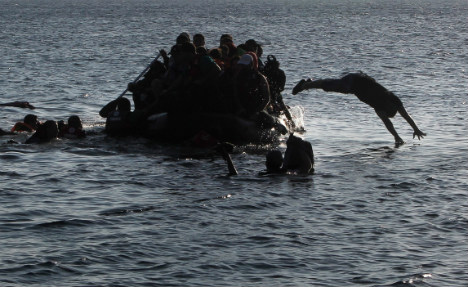 Refugees jump from a dinghy near Kos in 2015. Photo: DPA

Prosecutors charge that Ahmad Ghandour, 18, and his brother Fouad, 20, were working with a Kurdish gang of people smugglers who forced refugees aboard an unseaworthy vessel.

The gang had allegedly promised to take Iraqi citizens from the Turkish seaside resort of Bodrum to the Greek island of Kos for around $2,500 (€2,200) each, the Cologne court heard.

Prosecutors charge that the migrants had been told they would travel on a yacht but were instead taken by rubber dinghy and prohibited from wearing orange life vests to evade the authorities.

The traffickers, including the two brothers, allegedly forced the 17 refugees aboard the boat, using threats of violence, on the night of November 16th-17th last year.

The voyage ended in tragedy when the overloaded boat capsized off Kos and at least eight of the passengers died.

The prosecution based its case in large part on the witness testimony of an Iraqi man who lost his wife, daughter and one of his two sons in the shipwreck.

The bereaved man had first accused the Syrian brothers of causing the tragedy after the survivors landed on Kos, said a defence lawyer, adding that Greek authorities at the time dismissed the claim.

The defence insisted the brothers themselves were refugees who made the dangerous crossing several nights later in an overcrowded boat that “almost capsized”.

Having arrived via the Balkans route in Germany, Ahmad and Fouad Ghandour then stayed in a refugee shelter in Cologne.

Early this year in Cologne, entirely by coincidence, they again ran into the Iraqi man, who contacted police.

The brothers were arrested on March 24th and kept in detention until May 3rd, then released pending the trial.

If found guilty, the elder brother could face up to 15 years jail, the younger one up to 10 years of juvenile detention.

The verdict is expected on December 6th.