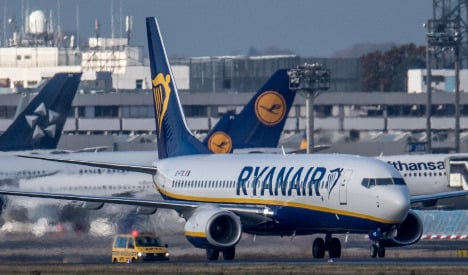 Ryanair hopes to bring 400,000 travellers per year from the German financial centre to the sun-soaked tourist destinations of Alicante, Faro, Malaga and Palma de Mallorca with 28 flights per week starting in March 2017, Ryanair chief commercial officer David O'Brien said in a statement.

O'Brien said the new base represented an investment of around $200 million (€180 million).

Ryanair will count nine bases in Germany once Frankfurt is up and running, among some 85 in Europe.

Until now, it has only flown to Hahn airport more than 100 kilometres away on the Main River.

Like its peers, the no-frills carrier has avoided Frankfurt due to the high fees charged by Fraport, which mostly serves higher-end airlines.

The only low-cost operators currently flying to the hub are Iceland's WOW and Spanish Vueling, which between them account for around four percent of traffic, a Fraport spokesman told AFP.

Eurowings, the low-cost subsidiary of German aviation giant Lufthansa, has also stayed away from Frankfurt.

“We can't accept that competitors get the red carpet rolled out with unfair advantages, while those who have for many years been paying for Frankfurt's infrastructure to be built up with high fees pick up the tab,” said BDF director Michael Engel.