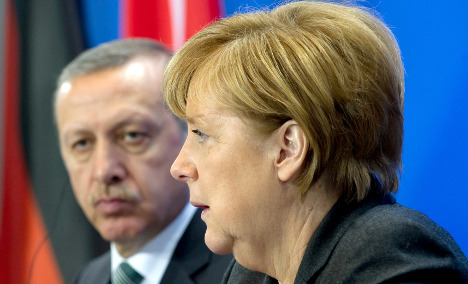 “For me and the entire government, it is highly alarming that freedom of the press and speech are being restricted again and again,” she said after Turkey detained at least a dozen journalists and executives from the Cumhuriyet daily.

The arrests were “the latest example of this already very sad trend,” Merkel said at a joint press conference with Swiss President Johann Schneider-Ammann. “We have great doubts that it complied with the rule of law.”

Adding that the German ambassador had visited the Cumhuriyet newsroom Tuesday, Merkel said: “The journalists can be certain of our solidarity, just like all the others in Turkey who, under difficult conditions, are active for freedom of the press and speech.”

She said the issue would “obviously play a central role” in talks on Ankara's long-standing but currently stalled bid to join the European Union.

Merkel's government was initially criticized for its reaction to the arrests after her head spokesman Steffen Seibert said that German leaders wanted to “express concern” about the actions taken against the journalists.

The former editor-in-chief of the Cumhuriyet newspaper, Can Dündar, said in an interview with Die Welt, published on Wednesday before Merkel's comments that the German government's reaction had been “truly weak”.

“The reaction of the German government was truly weak, also in comparison to other Western partners of Turkey, like the reaction of the US,” said Dündar, who himself was sentenced to more than five years in prison in May, though he was released pending an appeal and then left for Germany.

“Being concerned does not help us Turkish journalists. Obviously Erdogan is much more worried about critical media reports in his own country than about the concerns of the German government. He seems to be quite indifferent to this.”
Deteriorating relations
Merkel's comments on Wednesday follow a series of rows this year between Berlin and Ankara on civil rights and sensitive historical questions.
Relations took a dive after the German parliament in a June resolution declared the Ottomans' First World War-era massacre of Armenians a genocide.
The vote infuriated Erdogan and for months Ankara blocked German parliamentarians from visiting German troops at a NATO base in southern Turkey, until Merkel's government publicly clarified that the vote was non-binding.
Another major dispute was sparked by German TV comic Jan Böhmermann who in a so-called “Defamatory Poem” satirically accused the Turkish president of bestiality and paedophilia, sparking a criminal complaint by Erdogan and an ongoing civil case.
Germany is home to a three-million-strong ethnic Turkish population, the legacy of a massive “guest worker” programme in the 1960s and 1970s.
As Europe's top destination for refugees last year, Germany has relied on an EU-Turkey agreement designed to stop the massive influx of people fleeing war and poverty.