Many know that schadenfreude and doppelgänger come from the German language, but here are ten words that you never realized have German roots.

Etymology is no exact science, and of course the roots of words can be debated over and claimed by different languages.

Despite this, the Oxford English Dictionary (OED) shows that all these words have come from German.

This is a word in English that conjures up beautiful images of a nothingness that exists in some distant place beyond the reaches of civilisation. But did you ever consider the fact that it is actually German? Well, it is obvious if you think about it for a while – it is just a compound of the words hinter (behind) and land, and is akin to the word back country.

This word is now used interchangeably with backpack, and came from the German term combining “Rücken” (back) and “Sack” (bag).

It was first used in English in the mid-19th century in writing by mountaineers and was spelled “rücksack”, but the umlaut was dropped not long after. 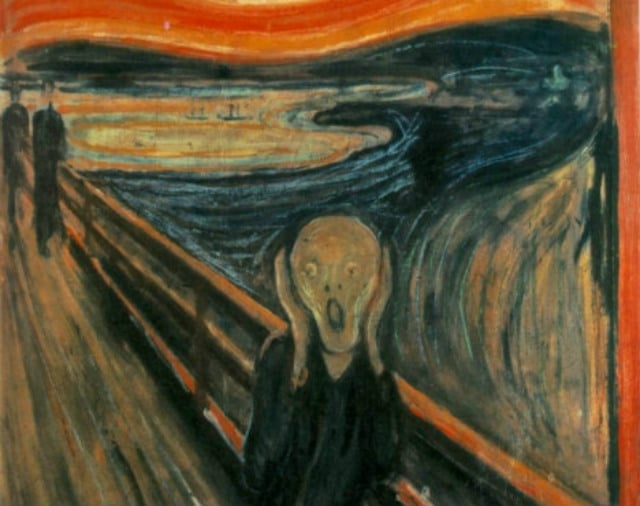 Meaning “fear” in German, the word in English has connotations of anxiety and neurotic fear. It was first recorded in the English language in the writing of George Eliot (the pen name of Victorian writer Mary Ann Evans) in 1849, but she wrote it as ‘Die Angst’.

Popularized in the translations of Sigmund Freud’s works in the new field of psychoanalysis, it was seen as a foreign word until the 1940s, when it started to appear as ‘angst’, and then became properly accepted as an English word.

Now more often associated with Asian cuisine – such as udon and rice noodles, or even noodle soups – the root of this word is firmly German. The German general term for pasta is “Nudel”, and it is thought that this word is a variant of the more famous German food stuff: the “Knödel”, a type of dumpling.

First used in English in 1779, the term actually predates “pasta” in the English language by around 40 years. 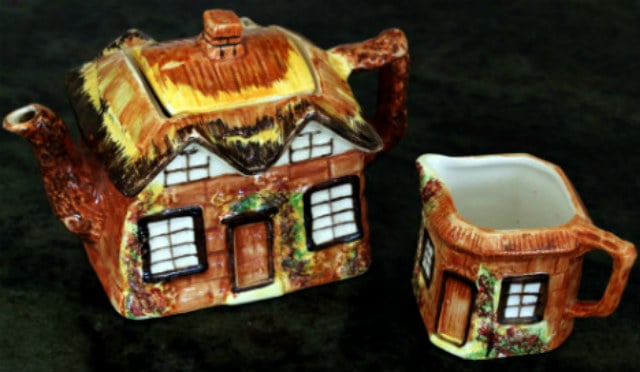 Some might see this tea set as charming and unique, but to most people it's pretty kitsch. Photo: Matthias Blume / Wikimedia Commons

This word comes from the German noun “Kitsch”, meaning “trash”. It has since lost the German capital letter, and is most often used to describe artworks as trashy, even tacky – a thatched cottage tea pot, for example.

First used in the 1920s to describe music and art, the word is extremely hard to define in English. The English philosopher Roger Scruton describes kitsch as “fake art, expressing fake emotions, whose purpose is to deceive the consumer into thinking he feels something deep and serious.”

But kitsch also started to become trendy with pop art, and artists such as Andy Warhol and Jeff Koons are known for deliberately producing kitsch artwork.

This word emerged as a shortening of the German word “Lagerbier”, coming from the German term “Lager” (storehouse), meaning “beer brewed for storing”. The word first came into use in English in the 1850s, not long after German brewers had begun to brew a new type of beer that was fermented in a different way, called Pilsner.

This kind of beer was brewed at a cooler temperature using a different strain of yeast, and then was left for a maturation period in cold storage. Lager was therefore the term used to refer to beer made using this new process, which produced a typically lighter drink – the type that is more widely drunk today.

The name for this metal was coined in the mid-18th century by the Swedish mineralogist Axel von Cronstedt from the Swedish “kopparnickel”, but this word was taken directly from the German “Kupfernickel”.

Copper miners named this different metal ore Kupfernickel, which literally translates as “copper-devil”. The German word “Nickel”, related to the name Nicholas, is an antiquated term for a mythological spirit that haunts houses, caves and mines. They used this term because they were often fooled into thinking that nickel ore was copper – rather like how the mineral pyrite is often known as “fool's gold”.

In the second half of the 19th century, people began to refer to small coins as “nickels” because they were made of nickel rather than copper.

Defined by the OED as the “urge to derive pleasure, especially sexual, from one’s own pain or humiliation”, the word is “Masochismus” in German. It takes its name from an Austrian fiction author writing in German in the second half of the 1800s, called Leopold von Sacher-Masoch.

His stories often included sexual pleasure derived from pain, and the German term “Masochismus” was created by psychiatrist Richard von Krafft-Ebing in an 1886 book, before first being translated into English as “masochism” in 1892.

German pickles and sausage are probably not the first things that spring to mind when you think of a delicatessen. The term perhaps recalls more baguettes and camembert, or olives and prosciutto, but delicatessen shops came from the German “Delikatesse”.

The German word does have its roots in Latin “delicatus” and the French word “délicatesse”, but the French term for a fine foods shop is actually “une épicerie fine”.

The shops called delicatessens were first opened in New York and London by German proprietors, such as Lingner’s Delicatessen on London's Old Compton Road in Soho, recorded in 1877.

Diesel is used in about 50 percent of cars in Europe, but only in around three percent of the market in the US. The German word Diesel was named after the German inventor and mechanical engineer Rudolf Diesel, who patented the idea for his new engine in 1895 that used diesel fuel rather than petrol.

The engine works by compressing only the air and therefore does not use a spark plug to ignite the air-fuel mixture. Although the diesel engine and German car industry has taken a serious hit recently with Volkswagen's diesel emissions scandal, diesel engines are still very common across Europe.