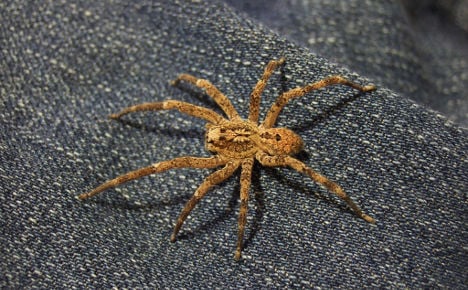 The first of these species is the Kräuseljagdspinne in German, or zoropsidae in English, which is originally from the Mediterranean region.

It made its way to Bavaria as a “stowaway” aboard cars and trains travelling to Germany from Mediterranean countries, Jörg Spelda from the Bavarian State Collection of Zoology told the Süddeutsche Zeitung on Tuesday.

The little arachnids normally wouldn't be able to survive the cold German winter, but by finding boltholes near to humans and their heating systems, they have managed to adjust (sorry again arachnophobes).

The first indication that the zoropsidae had migrated north came when a spider enthusiast brought what appeared to be one of the species in to the Bavarian State Collection of Zoology in 2014. Genetic testing then confirmed this to be the case.

The spider can grow up to 5cm long, including legs and body, and is poisonous – fortunately though, it doesn't bite.

Those who worry about spider bites should keep an eye out for the zoropsidae's smaller cousin, the Dornfinger, or yellow sac spider, which also hitched a ride up to Germany a few years ago. The yellow sac spider is the only spider species in central Europe with the ability to pierce human skin and inject its poison.

It may only grow to be around 1cm in length, but the yellow sac spider packs a punch, with its bite comparable to a wasp or bee sting.

But unless you're allergic, there's no need to rush to the doctor, said Spelda.

The creature is naturally shy, so unless you intentionally disturb it during mating season or while its eggs are hatching, then you're unlikely to feel the force of its fangs.