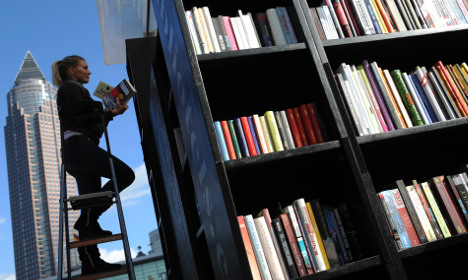 Organisers of the world's largest publishing event say the focus on art and technology is a logical next step as the creative industries become ever more connected.

The fair, which opens on Wednesday and is expected to draw some 275,000 visitors, has always been about “content – regardless of its format”, the event's vice-president Holger Volland told AFP.

Among the main draws at the five-day gathering will be virtual reality experiences, with several exhibitors unveiling projects that plunge visitors into a world that until then only existed on the page.

Taiwanese artist Jimmy Liao's picture book, “All of My World Is You”, will come to life once visitors slip on a VR headset that will allow them to interact with the main character, a mysterious young girl, and complete challenges to make her smile.

In the spotlight as guest of honour is the literary culture and language of Flanders and the Netherlands, who have created three separate VR experiences, including one allowing users to alternate between the perspectives of a father and his nine-year-old daughter who are mourning the loss of a family member.

“Literature exists not just on the page,” said Suzanne Meeuwissen of the Dutch Foundation for Literature, a co-initiator of the projects, pointing to recent Nobel Literature Prize winner Bob Dylan as an example.

Virtual reality is a brand new canvas, she said, and “writers and artists are hungry to explore this unfamiliar territory”.

Educational publishers are also tapping into new technology, from text books that can be made interactive with the help of an app to 3D printouts of organs to use in biology lessons.

In the “Classroom of the Future”, visitors can watch students and teachers try out the latest innovations.

It remains to be seen, of course, to what extent all these ideas can generate revenues for publishers and creators, a question that will be a hot topic in Frankfurt.

Such is the focus on creative content across different media that there will even be a “fair within a fair” this year, called Arts+, where artists, architects and museums will talk about the challenges and opportunities of working with digital technology – and show off some results.

Volland described Arts+ as a place to “discuss new business models and synergies between art and technology”.

One of the highlights will be a project called “The next Rembrandt” in which a Dutch team used artificial intelligence and a 3D printer to create a “new” work by the master painter based on a computer algorithm that worked out the average features of a typical Rembrandt subject.

But at its heart, the Frankfurt fair is for book lovers and with over 7,000 exhibitors from more than 100 countries, visitors will get the chance to discover thousands of new titles in all imaginable genres.

One of the biggest names to attend will be British contemporary artist David Hockney, who will unveil an oversized, 500-page book illustrating his life's work, from the famous sun-soaked swimming pool paintings of the 1960s to his recent series of iPad drawings.

Adding a touch of royal flair to this year's event will be Dutch King Willem-Alexander and Belgium's King Philippe and Queen Mathilde, who will open the Dutch-Flemish pavilion on Tuesday, on the eve of the official kick-off.

The Frankfurt fair dates back over 500 years, with the first edition taking place shortly after the Gutenberg printing press was invented in nearby Mainz.