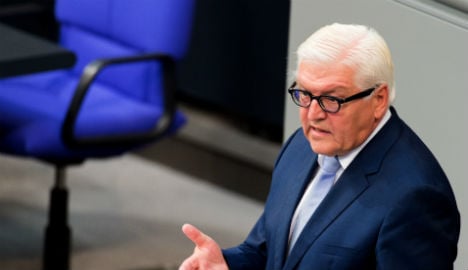 Foreign Minister Frank-Walter Steinmeier speaking in Germany's Bundestag in September. Photo: Monika Skolimowska / dpa
Relations between the two have nosedived since a ceasefire they agreed to in September fell apart in less than a week, and Washington on Friday accused Damascus and Moscow of staging “war crimes” in Aleppo.
At least 250,000 people are living under siege in rebel-held east Aleppo, and facing almost-daily heavy bombing since the Russian-backed Syrian army launched an offensive to retake the city last month.
“It's a fallacy to think that this is like the Cold War. The current times are different and more dangerous,” Steinmeier told the mass-circulation Bild newspaper.
Wolfgang Ischinger, who served as OSCE mediator for Ukraine, told the newspaper that there was “considerable danger of a military confrontation.
“This danger has not been as strong in decades and the confidence between West and East has never been so low,” he said.
The UN Security Council will vote on two rival resolutions on Syria on Saturday, one drafted by France calling for an end to air raids on Aleppo and a second by Russia that makes no mention of a halt to the bombings.
Now in its sixth year with more than 300,000 dead, the war in Syria has raged on as the Security Council has been divided between Russia, which backs President Bashar al-Assad, and Western powers supporting opposition rebels.