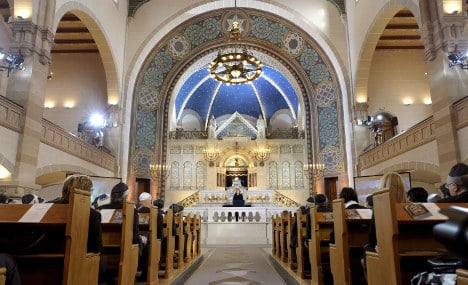 A lawyer told the court in an ongoing case against the last surviving member of a murderous neo-Nazi cell that a police officer saw its members scouting out Rykestrasse Synagogue in Berlin, Germany’s largest synagogue, according to Tagesspiegel.

The prosecutor, Yavuz Narin, was relying on a report that the officer made to the Berlin Office of Criminal Investigations.

In 2000, the police officer was guarding the synagogue when he saw the now deceased National Socialist Underground (NSU) member Uwe Mundlos at a cafe nearby, along with Beate Zschäpe, who is currently on trial for the ten murders committed by her three-person cell.

The two were joined by another man and a woman with two children, according to Narin. And the group was together looking at a city map. Later the police officer saw Zschäpe and Mundlos again by the synagogue.

Narin explained that it appeared Zschäpe and Mundlos were scoping out the synagogue for a possible attack.

Later in the evening after the officer spotted the NSU members, he was watching television and saw their pictures shown, listed as criminals. He then called the criminal office in Thuringia, the state where the group originally formed. The next day, he was questioned by and gave statements to the Berlin criminal office. There he again identified Zschäpe and Mundlos in photos.

Narin has now requested that the officer be brought in as a witness in the case.

Mundlos and the third member Uwe Böhnhardt are believed to have carried out the murders, and were found dead in an apparent double suicide following a failed bank robbery attempt in 2011. Zschäpe turned herself in days later.

The NSU is accused of carrying out a series of ten murders between 2000 and 2007 against mostly victims with immigrant backgrounds – eight ethnic Turks, one Greek and one German policewoman.

Zschäpe has stated that she had no knowledge of the murders before they were committed, claiming that the other two members only told her after the fact.

The murders were committed around Germany, from Rostock in the north down to Munich, but none in Berlin. The group is also implicated in two bombings in Cologne as well as numerous bank robberies.

Breaking her three years of silence during the trial, Zschäpe admitted in court last week that she had once identified “completely with aspects of nationalistic thought,” but she was no longer this way.

“Today I do not judge people based on their ethnic background or their political views but on how they act,” she said.

She apologized to the victims of the NSU and their relatives, referring to a statement she had made through her lawyer in December 2015.

The NSU case has also raised questions about the competence of German authorities: it took years for police to connect the murders to one another, or to right-wing extremism.