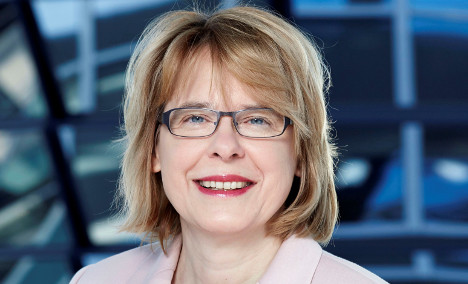 German Bundestag representative Bettina Kudla has since deleted a tweet in which she said “Merkel denies it, [CDU leader Peter] Tauber dreams about it. The Umvolkung of Germany has already begun. There is a need for action!”

The term Umvolkung was used by Nazis to mean “ethnic transformation”. It referred to the assimilation of German people who had forgotten about their language and culture, and was also used to describe the “re-Germanisation” of ethnic Germans in lands conquered by the Nazi regime.

The term has since been used by members of the far-right scene to describe their fears of immigrant populations taking over the German country and culture as their population grows.

Kudla had also tweeted in August: “On the German parliament building it states ‘to the German people’. There is a difference between citizenship and belonging to a people!”

The leader of the conservative Union parties (CDU and CSU) Volker Kauder had harsh criticism for Kudla, but told Spiegel that there would be no immediate consequences for her.

“But we are going to take it one step at a time… At the moment there is no reason to exclude her from the party faction.”

He added that the fact that she had deleted the tweet was “an important sign that she has accepted the criticism that she sparked”.

Party leaders are now set to speak with Kudla about the tweet.

“One must firmly address misconduct,” CDU/CSU chief whip Michael Grosse-Brömer told reporters on Tuesday, adding that the faction would give Kudla the opportunity to “personally be heard”.

Meanwhile, deputy leader of the Alternative for Germany (AfD) party Beatrix von Storch reportedly offered Kudla the opportunity to join her party, should she be kicked out of the CDU.

“Everyone may at sometime take on the wrong tone,” von Storch told Bild. “But fundamentally, conservative representatives are welcome by us.”

Von Storch herself has been harshly criticized for certain social media postings. In July after France beat the German national football team in the semi-final of the European Championship, von Storch wrote “Maybe next time the German NATIONAL TEAM should play again.”

Many took this message as a jibe at the team's players with immigrant roots, and von Storch later deleted the post and said it had been a misunderstanding.