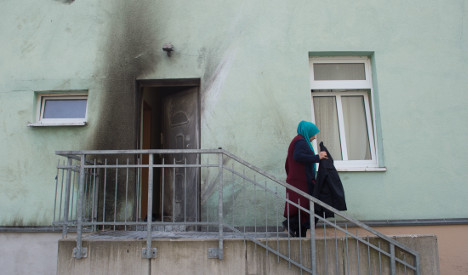 The Dresden mosque that was hit by a homemade bomb attack on Monday. Photo: DPA.

Three mosques, a prayer room and a meeting centre have been put under police guard, Spiegel reported.

The bomb attacks hit a mosque and an international convention centre in the eastern German city of Dresden, police said Tuesday, adding that they suspected a xenophobic and nationalist motive.

No one was injured in the blasts late Monday in a city that has become a hotspot for far-right protests and hate crimes following Germany's huge migrant influx.

“Although no one has claimed the attack, we assume a xenophobic motive,” said Dresden police chief Horst Kretzschmar. “We also suspect a connection with celebrations next weekend for the Day of German Unity” on Monday, October 3rd.

Dresden will host national celebrations Monday to mark 26 years since the reunification of East and West Germany, to be attended by Chancellor Angela Merkel and President Joachim Gauck.

“We have now switched to crisis mode,” Kretzschmar said, with police deployed to guard the city's two mosques and an Islamic cultural centre.

The first homemade bomb went off around 9:50 pm local time on Monday and damaged the door of the mosque.

The second blast about 25 minutes later happened at the main venue for next Monday's festivities, the city's international convention centre which also includes a hotel. It was partially evacuated.

The police chief said that the attack on the mosque could have easily led to casualties as the imam, his wife and two young children were inside.

“The explosion could have led to the whole building going up in flames,” Kretzschmar said.

Dresden, a Baroque city in Germany's ex-communist east, is also the birthplace of the anti-immigration Pegida street movement, short for Patriotic Europeans Against the Islamisation of the Occident.

Its members have angrily protested against the influx of refugees and migrants that last year brought one million asylum seekers to Europe's biggest economy.

About a dozen demonstrations are planned over the long weekend, by both Pegida and by anti-fascist groups.

Saxony state premier Stanislaw Tillich called the “cowardly” bombings an “attack on freedom of religion and on the values of an enlightened society” that could easily have claimed lives.

German Interior Minister Thomas de Maiziere said the mosque attack was “all the more scandalous” because it happened on the eve of the 10th annual meeting of the dialogue forum the German Islam Conference.

Saxony state saw far-right hate crimes targeting shelters for asylum seekers rise to 106 in 2015, with another 50 recorded in the first half of this year.

In an annual report outlining progress since reunification, the government warned last week that growing xenophobia and right-wing extremism could threaten peace in eastern Germany.