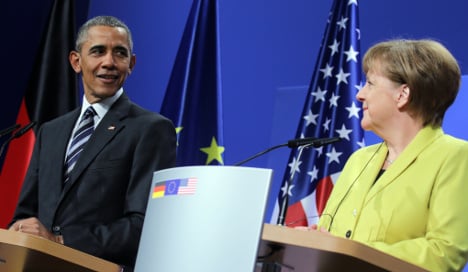 Obama addressed world leaders at the UN in New York on Tuesday, speaking on the topic of the international refugee crisis and the need for countries to collaborate more to take care of those fleeing violent wars.

“I want to personally thank Chancellor Merkel and [Canadian] Prime Minister Trudeau, and the people of both those countries – because the politics sometimes can be hard, but it's the right thing to do,” Obama said.

“It is a crisis of our shared security. Not because refugees are a threat. Refugees, most of whom are women and children, are often fleeing war and terrorism. They are victims. They’re families who want to be safe and to work, be good citizens and contribute to their country.”

Obama also went on to say that the world must learn from the international “failure” of countries in the past who refused to take in Jewish refugees escaping Nazi Germany.

“I believe history will judge us harshly if we do not rise to this moment.”

Meanwhile Merkel has been facing increased pressure at home to further tighten her liberal refugee policies, especially since her party has lost votes in recent elections to the anti-immigration Alternative for Germany (AfD) party, including in the typically left-leaning capital of Berlin.

The Chancellor admitted this week that Germany had been unprepared for the hundreds of thousands of refugees that applied for asylum last year, making these statements a day after her party slipped to just 18 percent of the vote and the AfD shot up to 14 percent in the Berlin election.

Merkel also promised that there would not be another mass movement of asylum seekers into the country as there was last year.

But she also continued to defend her decisions as “political and ethical” and was confident about the country’s ability to integrate refugees.

Obama, too, stressed the ethical obligation to assist the world’s refugees.

“If we were to turn refugees away simply because of their background or religion, or, for example, because they are Muslim, then we would be reinforcing terrorist propaganda that nations like my own are somehow opposed to Islam, which is an ugly lie that must be rejected in all of our countries by upholding the values of pluralism and diversity,” the US president said.

“This crisis is a test of our common humanity – whether we give in to suspicion and fear and build walls, or whether we see ourselves in another.”

“To slam the door in the face of these families would betray our deepest values… It would be to ignore a teaching at the heart of so many faiths that we do unto others as we would have them do unto us; that we welcome the stranger in our midst.”