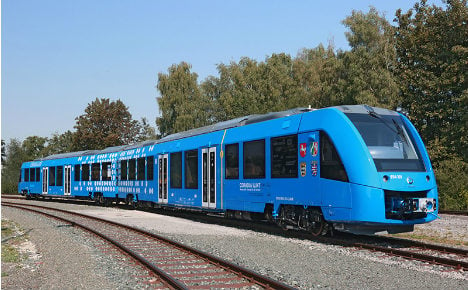 The hydrogen, or hydrail, train is set to run on the Buxtehude-Bremervörde-Bremerhaven-Cuxhaven line in Lower Saxony starting in December 2017, Die Welt reported on Tuesday.

The train – called the “Coradia iLint” – has been developed over the past two years by French company Alstom and was presented on Tuesday at the Berlin InnoTrans trade show.

The hydrogen train operates using a hydrogen fuel tank, stored on the roof of the train, that in turn powers a fuel cell to produce electrical energy. This technology provides a new environmentally friendly alternative to the diesel trains that are still used across much of Germany.

“Alstom is proud to launch a breakthrough innovation in the field of clean transportation which will complete its Coradia range of regional trains,” said Alstom chairman and CEO Henri Poupart-Lafarge, in a statement.

“It shows our ability to work in close collaboration with our customers and develop a train in only two years.”

Engineers have been developing ‘hydrail’ technology for the last 15 years, but mostly with freight trains.

In 2006, the East Japan Railway Company gave the first test run for a hydrail railcar. And in 2015, a Chinese company introduced the first hydrail tram.

The new Alstom train will be the first hydrogen passenger train to regularly operate on long-distance journeys.

With a full tank, the new locomotive will be able to travel 600 to 800 kilometers.

Because of its much larger fuel capacity, the train does not have to confront the same problems that hydro-cars face with refueling. Another advantage is its quietness: even at its top speed of 140 km/h, the only noise is that produced by the motion of the wheels and air resistance.

Transport authorities in Baden-Württemberg, Hesse and North Rhine-Westphalia also want the trains for their states, and the company says other countries like the Netherlands, Denmark and Norway have also expressed interest.

Alstom has not revealed what these new trains will cost, but they are known to be more expensive than the current diesel models, Die Welt reports.