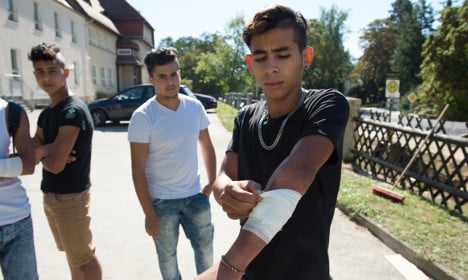 Mehdi from Morocco shows a gash in his arm sustained when refugees clashed with far-right affiliates in Bautzen on Wednesday. Photo: DPA.

In the aftermath of Wednesday's violence, local officials have imposed new rules for young asylum seekers. Four young men who participated in the fight, between the ages of 15 and 20, were taken to other refugee facilities, so that they would no longer have an influence over others, Bautzen officials said on Thursday.

Officials also tightened rules in general for the roughly 30 unaccompanied minors living in Bautzen, imposing an alcohol ban as well as a curfew of 7pm.

The fight broke out after around 80 people from the far-right scene gathered in a town square on Wednesday evening and were met by a group of young male refugees.

Police chief Uwe Kilz said the violence had been sparked by the young refugees when they started throwing bottles and wooden slats at the far right group, though previously police had spoken of “mutual provocations” between the groups.

The right-wing extremists, many of whom were drunk, returned fire with stones and bottles, Kilz added, in the latest incident to hit the small former communist town, which has been the scene of several eruptions of hostility toward refugees.

Police struggled for hours to break up the fight. At one point, a teenage refugee was injured badly with a gash on his arm and needed an ambulance, but the far-right group started attacking the ambulance with stones.

About 350 people – mostly locals and many from the far-right scene – also met on Thursday at the same square, but it remained comparatively peaceful, police said.

Some 90 officers were on the scene and had to stop a conflict between about 25 left-wing affiliates and 300 locals after the leftists wanted to put up a sign condemning xenophobia.

One 30-year-old man from the group of locals did hit a video journalist in the arm, and police are investigating him for assault. Police also registered seven offenses of people using unconstitutional symbols and using slogans that incited violence.

Police are bringing in more officers as the far-right group plans to stage demonstrations on both Friday and Sunday.

The trouble this week had been building up over a few days, said Kilz, after young migrants had begun gathering regularly at the flashpoint downtown square called Kornmarkt over the summer.

Skirmishes had already broken out over the past week, but not on the scale of Wednesday's clash.

MP Caren Lay for the left-wing opposition Die Linke (the Left Party) said “that so many neo-Nazis were able to come together so quickly leads one to suspect that this racist attack was planned”, adding that the “pogrom atmosphere” in Bautzen must end.

Former communist eastern Germany has been the scene of several ugly incidents in which far-right extremists targeted asylum-seekers.

In February, a cheering crowd was seen outside a burning asylum-seeker shelter in Bautzen, clapping and shouting: “Good, that's up in flames.”

President Joachim Gauck, who had on several occasions urged Germans to extend a welcoming hand to refugees, was booed during a visit to Bautzen, a town of 40,000 people which borders the Czech Republic.