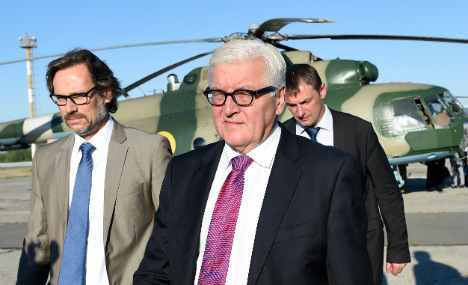 Frank-Walter Steinmeier and his French counterpart Jean-Marc Ayrault arrived in Kramatorsk, a city controlled by the Ukrainian army, an AFP correspondent reported from the scene.

Both Ayrault and Steinmeier have urged Kiev's pro-Western leaders to commit themselves more fully to a 13-point plan agreed in February 2015 under which the rebels would get partial autonomy within a unified Ukraine, an initiative unpopular among many Ukrainians.

The ministers were met by some 40 demonstrators in front of the office of the OSCE Special Monitoring Mission who were protesting against the prospect of giving partial autonomy to the rebel-held regions of Donetsk and Lugansk.

Protesters brandished signs that said “We are Ukraine” and “No to a special status for Donbass,” referring to eastern Ukraine's industrial heartland.

In a meeting with OSCE monitors, the ministers were briefed about ceasefire violations and shown fragments of mines, grenades and other explosive devices found in the area.

The visit comes after one of the bloodiest days in weeks saw government forces and the separatists lose three fighters each.

The two European powers last year helped negotiate the February 2015 deal that was meant to end the bloodshed and decide the status of the rebel-run regions by the end of last year.

But the so-called Minsk Agreements and a subsequent series of ceasefires have done little to halt daily battles that have killed nearly 9,600 people and destroyed much of Ukraine's eastern industrial heartland.