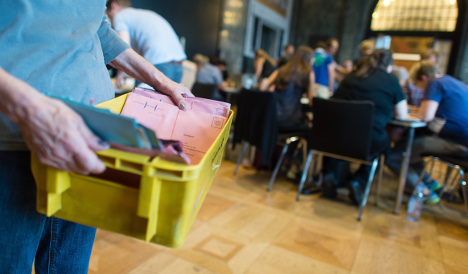 The Alternative for Germany (AfD) party won 7.8 percent of the overall vote in Sunday’s local elections in the western state of Lower Saxony, putting it at fourth place behind Merkel’s CDU (34.4 percent), the Social Democrats (31.2 percent) and the Green party (10.9 percent).

Each of the three traditional parties that came before the AfD lost support compared to the last community elections in 2011: the CDU that year held 37 percent of the vote, the SPD (Social Democrats) 34.9 percent and the Green party 14.3 percent. Only the Left Party improved slightly, up from 2.4 percent in 2011.

The Lower Saxony vote comes a week after the AfD beat out Merkel’s CDU in neighbouring Mecklenburg-Western Pomerania, where Merkel holds a seat in the Bundestag (German parliament). There it won 20.8 percent of the vote, ahead of the CDU’s 19 percent.

The AfD started in 2013 as a eurosceptic party, but has since shifted more to the right, winning support through its opposition to Merkel’s liberal refugee policy.

The elections in Lower Saxony were held to decide smaller community governments as well as city assemblies.

The AfD won more than 10 percent of the vote in the assembly for the state’s capital of Hanover, though it also fell behind the Social Democrats (31.2 percent), the CDU (29 percent) and the Green party (13.6 percent), according to the Hannoverische Allgemeine Zeitung.

And the results in Hanover also meant for that the SPD-Green party majority would be broken for the first time since 1989: the two parties together won just 30 of the 64 seats in the assembly.

There is concern now among the traditional parties about the AfD’s rise in popularity as Berlin’s state parliament elections approach next Sunday. A recent poll showed that 15 percent of Berlin respondents said they would vote for the AfD.