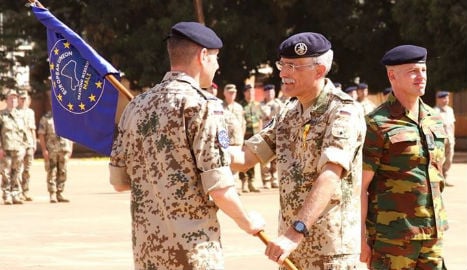 A change of command at the EUTM Mali, a joint military partnership between the EU and Mali. Photo: Eurocorps
The document, by French Defence Minister Jean-Yves Le Drian and his German counterpart Ursula von der Leyen, will serve as a “basis for considering a relaunch of European defence”, the ministry said and comes ahead of a European Union summit to discuss plans to boost the bloc's security and defence mechanisms.
The objective is to make European defence “more active and more useful without substituting it for national defence bodies which remain, by definition, the key to the security of EU member states,” a member of Le
Drian's entourage said.
“What we are looking for is to trigger EU operations more easily,” he added, without revealing details of the plans. He did say, however, that these were “concrete” proposals and not just “grand ideas”.
The Franco-German document proposes the establishment of a European defence headquarters, a common satellite surveillance system and the sharing of logistics and military medical resources, according to the Saturday edition of the German daily Sueddeutsche Zeitung.
There would be a tighter circle of EU members for some defence projects where it proves impossible to gain agreement from all, the paper added, citing the document.
There is also a suggestion for better use of Eurocorps, an intergovernmental military body that has France and Germany at its centre. Belgium, Spain and Luxembourg are members of the Strasbourg-based Eurocorps, set up for rapid deployment to hotspots.
The EU has already been involved in the training of foreign armies, as part of conflict resolution, and might become involved in financing their equipment.
The bloc could also become engaged in research and development, to strengthen the European defence industry. The discussions are in part due to the June vote by Britain to leave the EU.
According to von der Leyen, London had long “paralysed” European efforts to have a more closely integrated security policy.
French President Francois Hollande and German Chancellor Angela Merkel initiated the joint security initiative on the margins of a NATO summit in July and are set to present the resulting ideas for discussion at the EU summit in Bratislava next week.
The informal meeting is expected to provide a new impetus for the EU in several areas, including youth and investments, as the bloc seeks to forge its future without Britain. However British Prime Minister Theresa May reaffirmed on Thursday that she would not launch Brexit talks this year.
Url copied to clipboard!