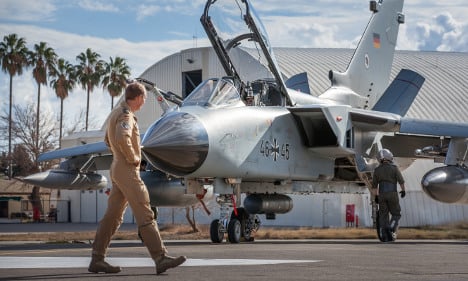 According to information obtained by Spiegel Online and published on Tuesday, the Defence Ministry has released a budget totalling €58 million to go towards German forces stationed at the Turkish Incirlik airbase, which is used to launch missions against terror group Isis.

About €26 million of the investment in the airbase will go towards building a private airfield for the German Tornado reconnaissance jets stationed at the base, as well as accommodation for the soldiers.

Another €30 million will go towards a modern, mobile command post for the soldiers. A defence ministry spokesperson told Spiegel that the command post would be mobile so that it could be dismantled and used for other purposes.

These improvements are seen as necessary, according to Spiegel, because since the beginning of the year, German soldiers have had to station their jets in an American area of the base, and live in makeshift accommodation.

Plans to expand the base and build up a long-term operation there had previously been reported by Spiegel in April, but this was stalled after Turkey denied a visit by German politicians. The Social Democrats (SPD) had even recently called for pulling out of the base.

The new budget plans appear to be a sign of reconciliation, according to Spiegel, after Ankara had repeatedly blocked a group of German politicians from visiting the base and German soldiers.

The rejection of the German politicians was seen as a retaliatory move by Turkey in response to the German parliament passing a resolution to recognize as genocide the First World War-era massacre of an estimated 1.5 million Armenians by Ottoman forces.

Turkey, home of the former Ottoman Empire, continues to reject that a genocide took place.

Spiegel reported last week that the German government would seek to distance itself from the Armenian genocide resolution by emphasizing that it was “non-binding”.

Chancellor Angela Merkel’s spokesman Steffen Seibert then did say on Friday that that resolution was “not legally binding”, but dismissed as false the idea that the government was trying to appease Turkey’s President Recep Tayyip Erdogan.

But after Merkel met with Erdogan before the G20 summit in China, she said on Sunday that she hoped the ban on German politicians at the base would come to an end.

“I think it is possible that in the coming days we will have good news about this completely justified request,” Merkel said.

Germany has taken on a non-combat role in the fight against Isis by sending the support of its reconnaissance jets.

German leaders have also recently outlined their vision of the country as a greater military force after decades of hesitance to send troops abroad in the wake of the Nazi era.
The Defence Ministry's so-called White Paper in July defined Germany as an increasingly “key player in Europe”.
“Germany, a globally highly connected country… has a responsibility to actively help shape the world order,” the document noted, going on to say that Germany is ready to “assume responsibility” and “help meet current and future security and humanitarian challenges”.